FEATURE: Is Sonic The Hedgehog Actually a Shonen Protagonist?

The blue blur's character traits have an undeniable connection to Shonen 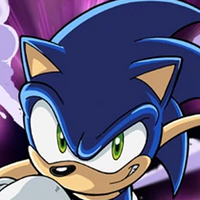 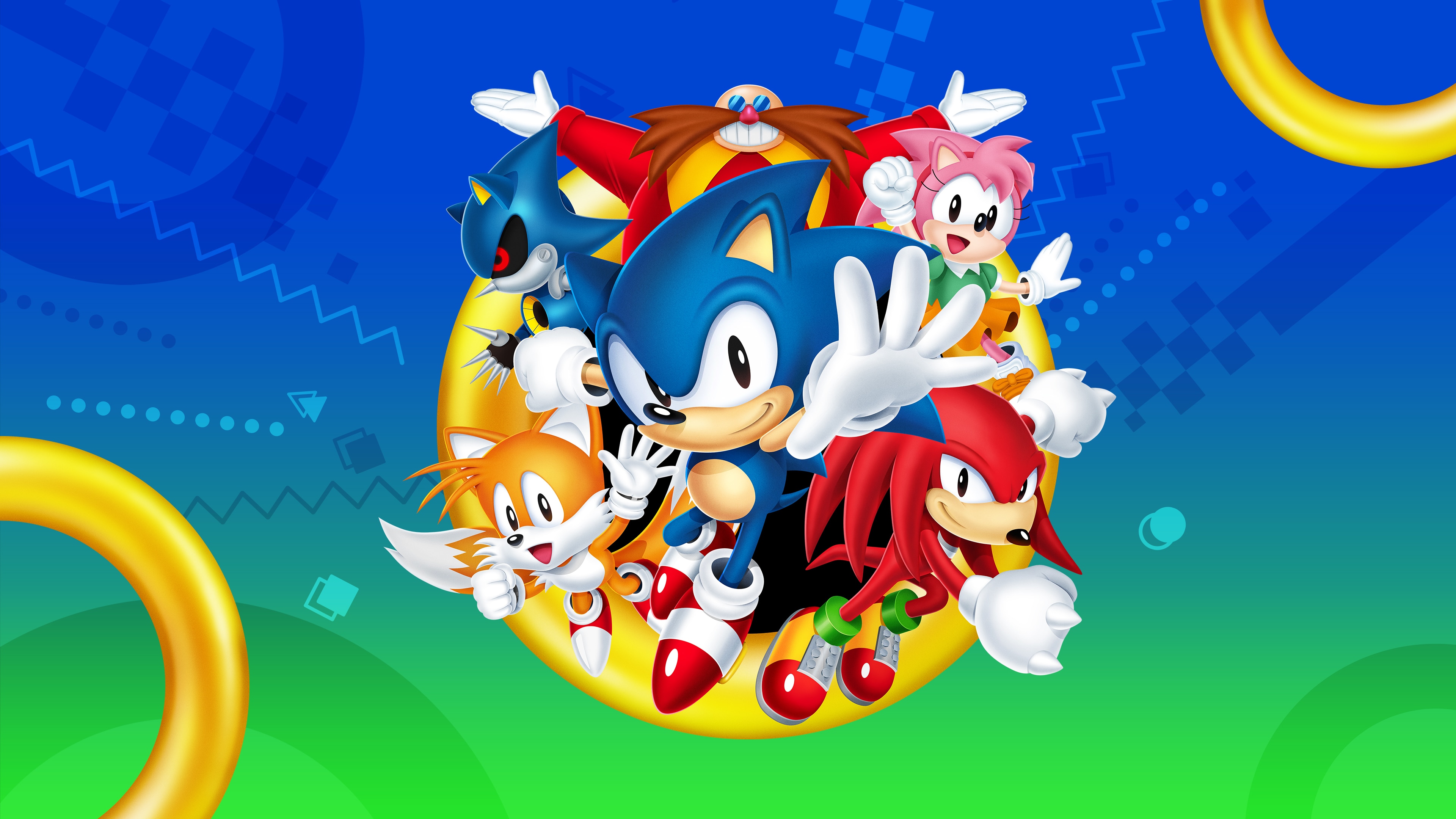 In the second issue of IDW’s Sonic the Hedgehog comic (written by Ian Flynn, art by Adam Bryce Thomas), Amy Rose urges Sonic to join the anti-Dr. Eggman resistance effort full time, which he declines over and over. Sonic’s reasoning is that he’s more of a lone wolf (or rather, hog), and that works best for him — specifically his words are: “It’s what I do. Just keep moving, doing good, saving folks and living as free as the wind. Living by my way. My own way.”

This quote represents a core aspect of the character and franchise: Shonen influences. Sonic the Hedgehog’s traits, ideals, personality, and the storytelling of his games are all derivative of Shonen manga and anime. Sonic is a Shonen protagonist, something that is often overlooked, but once seen, reveals layers of depth and complexity to the speedy blue hedgehog.

The Ways of His Heart Are Much Like the Sun 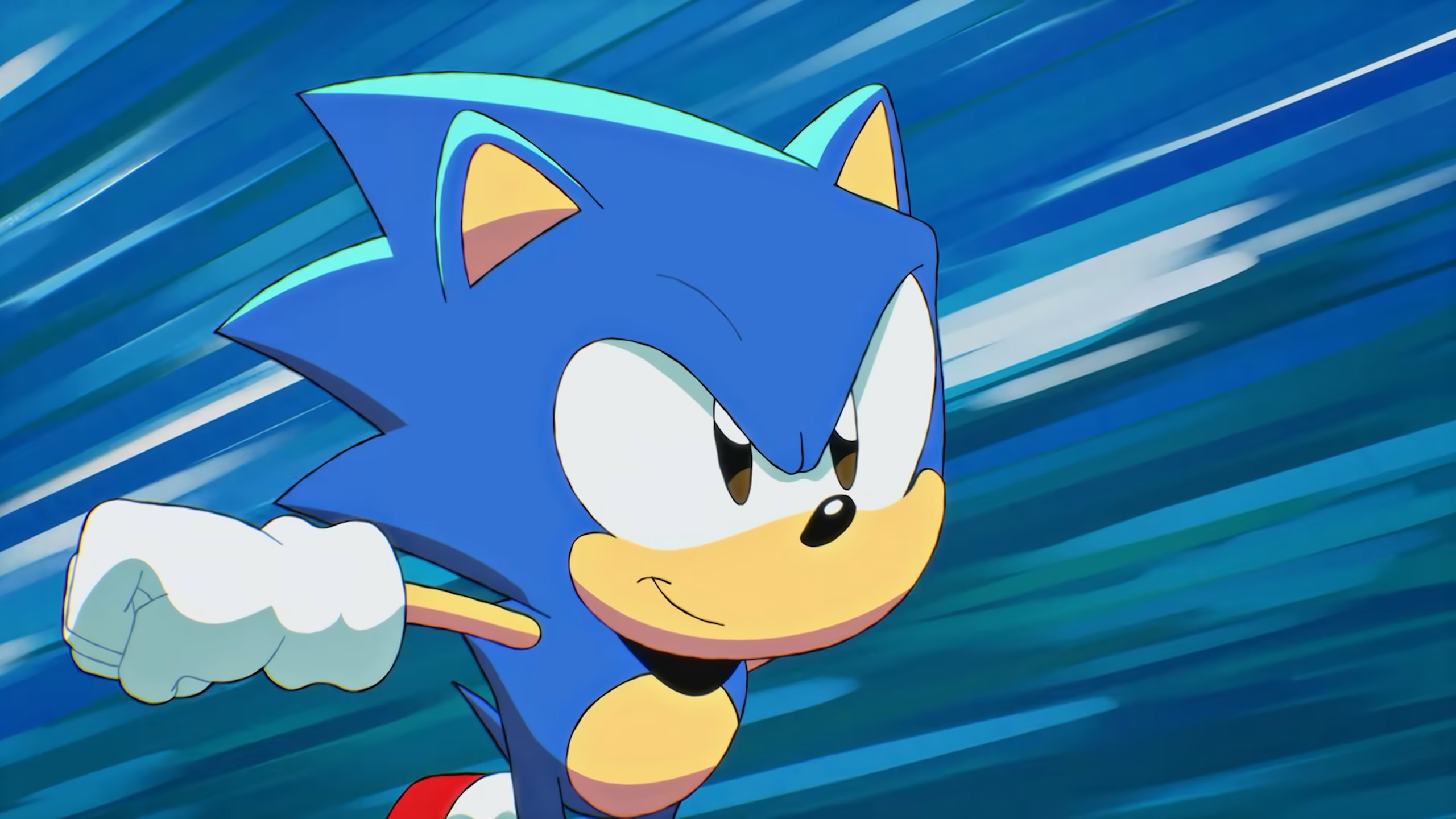 Sonic’s Shonen protagonist traits and influences have been present from the beginning. From his first SEGA Genesis appearance, Sonic’s fast-paced, impatient, energetic personality was placed front and center — the title screen showing off his cheeky sensibilities and his idle animation displaying clear boredom as he taps his toes, hands on his hips and eyes widening out of frustration that you kept him waiting. This is backed up by Japanese box art from Sonic 1, which lays out his philosophy — “When you want to do something, do it right away. Do it when you can” — and Sonic & Knuckles, which says of Sonic that “the ways of his heart are much like the sun.”

These traits read similarly to those of Goku or Luffy — they’re all hyperactive free spirits who are proactive and have drive when it comes to their desires. There’s no time for waiting, they have a path to follow and they’re gonna follow it!

The manual Sonic 1 manual also reads a lot like the world of Dragon Ball, particularly the Emperor Pilaf and Red Ribbon Army sagas. The prologue in the manual depicts South Island, which is full of adventure and danger and excitement, as well as a mysterious ancient power that must be kept out of the hands of evil, the Chaos Emeralds, which Dr. Eggman desires to gather in order to enact his rule over nature and its inhabitants — like Pilaf or Commander Red in their search for the Dragon Balls. 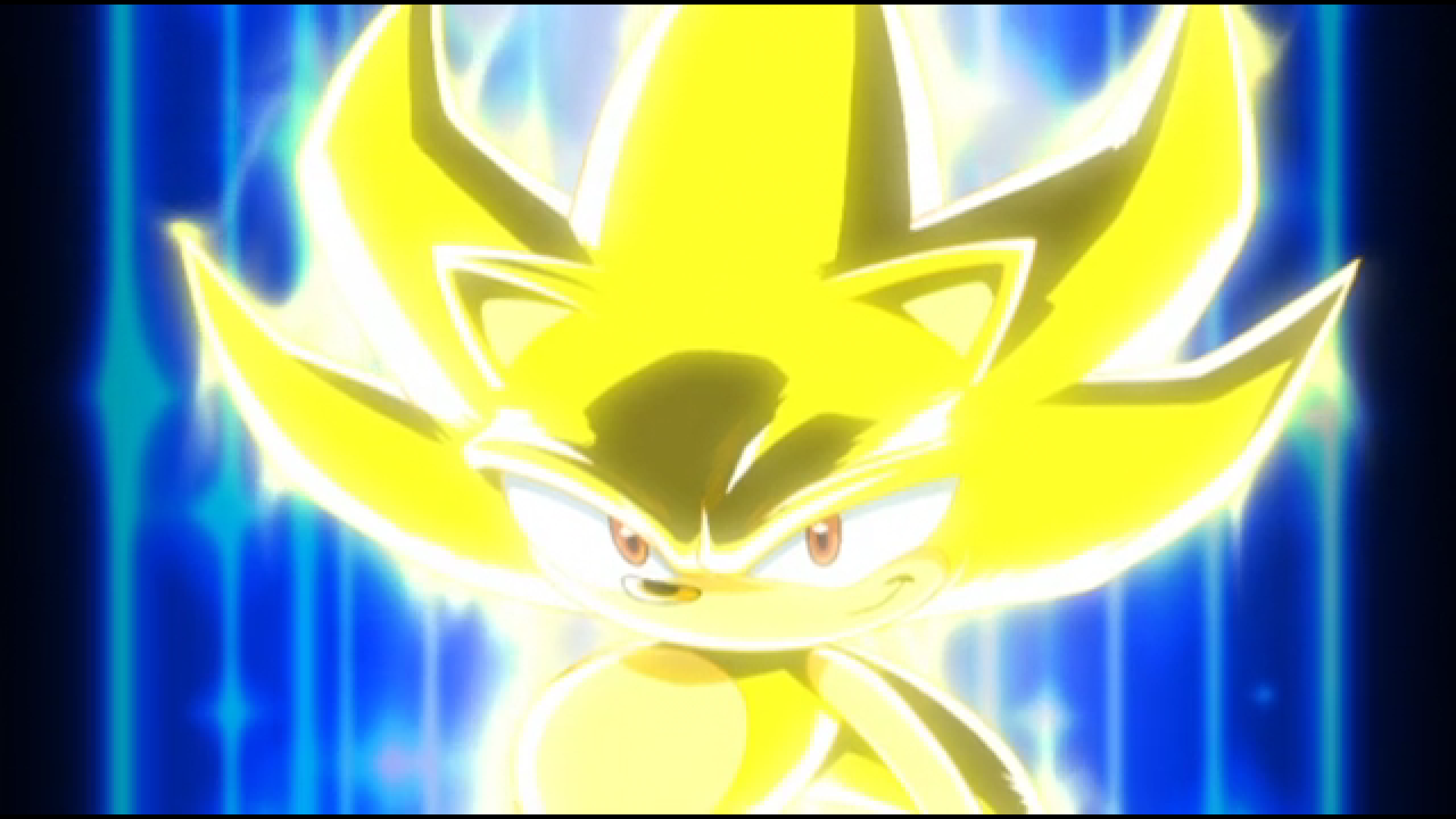 All of this derives from the "Sonic the Hedgehog Technical Files," an internal SEGA of Japan document known as the “Original Story” for Sonic. The Technical Files lay out clearly what Sonic’s personality is:

He is not a "do-gooding" hero. He is loyal to his friends and has a good sense of right and wrong, but he is a very independent guy who is mostly interested in doing his own thing. He is not book smart, but he is very street smart. He loves beauty, nature, and adventure, but his primary passion is for speed and indeed he can run faster than anyone on the planet.

This description — especially things like not being a “do-gooder,” “not being book smart” and mostly only being interested in doing his own thing — are exactly the traits that come to mind with Shonen protagonists like Luffy, Goku or Naruto. They’re not the brightest but they’re creative thinkers and they’re dead-set on their goals, stopping along the way to help whoever they come by, but rejecting traditional heroism. The Technical Files continue: “He is generally impatient and likes to get things done quickly. Sometimes this can work against him because he is not very detail oriented” matching with Sonic’s impatient idle animation and the proactive, driven, energetic nature of Shonen protagonists.

There’s also Sonic CD, which sees Sonic find his first of many rivals (another major trait of Shonen protagonists, rival collecting) in the form of Metal Sonic. Heck, CD is probably as close to Shonen anime that classic Sonic gets, since the game has opening and closing anime cutscenes from Toei that depict Sonic doing his thing, running and living like the wind when a problem arises and he pumps the brakes to help those in need. 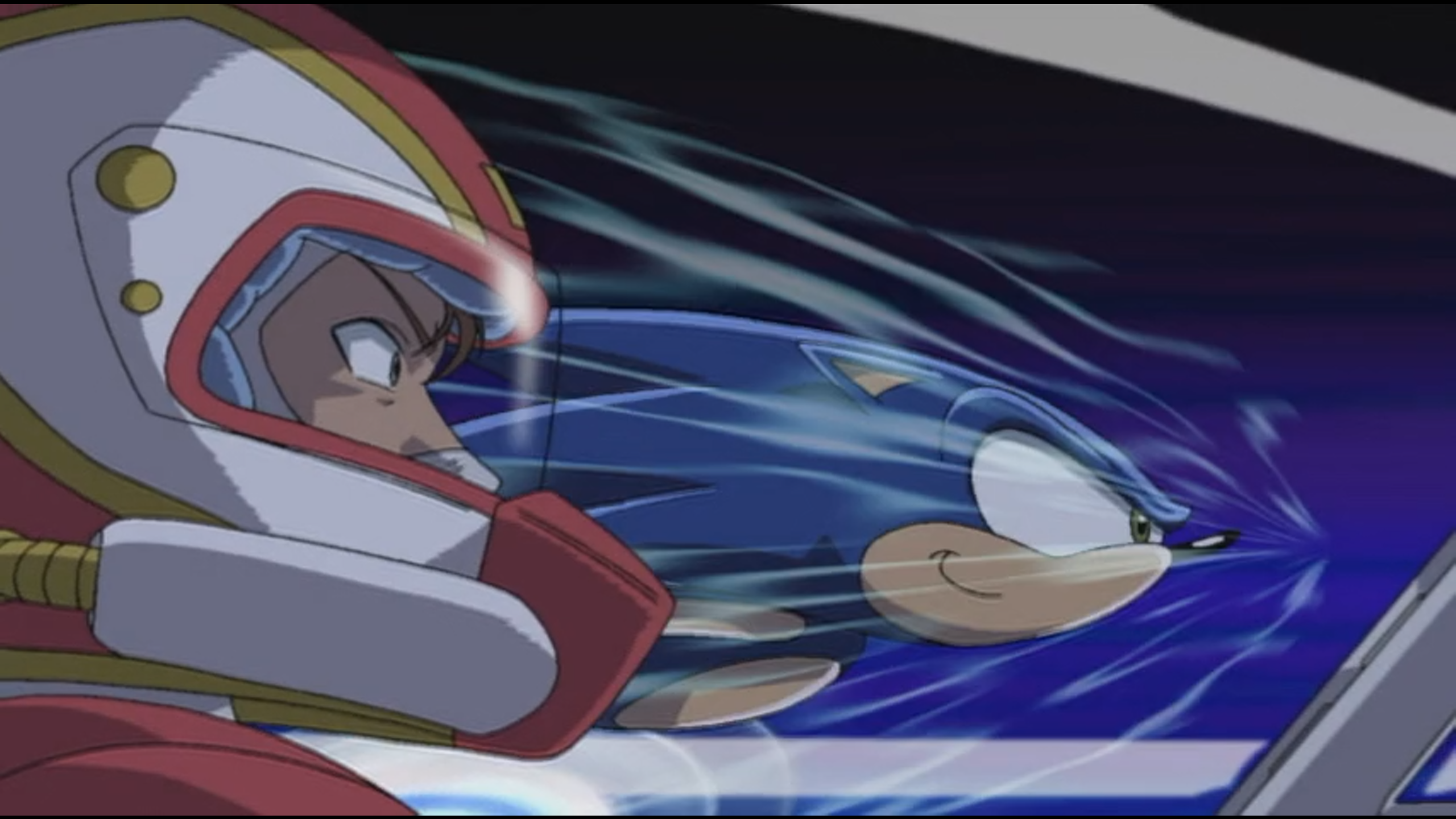 Going into Sonic Adventure, the plot feels as though Sonic Team leaned even further into Shonen storytelling. Dr. Eggman seeks to unleash the power of Chaos, a corrupted guardian spirit, in order to rid himself of Sonic and enact his plans for world domination. Meanwhile, Knuckles seeks to gather the shattered pieces of the master emerald, Amy helps a lost bird find its family, Big the Cat gets caught up in the adventure on the hunt for his pet frog and Eggman robot E-102 Gamma must hunt and destroy his robot brothers. This kind of intertwining plot feels straight out of Naruto or Dragon Ball Z, or even when the Straw Hats get split up in One Piece. Furthermore, Eggman eventually loses control of Chaos, who must be defeated by Super Sonic, a plot that feels similar to how out of control Buu grew after killing his master Babidi.

Sonic Adventure’s manual description furthers this: “With a strong love of freedom, the only thing Sonic hates is oppression. Despite his short temper, deep down he’s a really nice guy who is 100% committed to helping those in trouble whenever and wherever he can.” Once again we see the focus on freedom, a disgust for oppression, hot-headed personality, a kind heart that is often overlooked and the desire to help those he can on his path. Heck, even Sonic’s character theme from these games matches up with Shonen protagonists, the lyrics running phrases like “It doesn't matter now what happens, I will never give up the fight” and “It doesn’t matter who is wrong and right.” 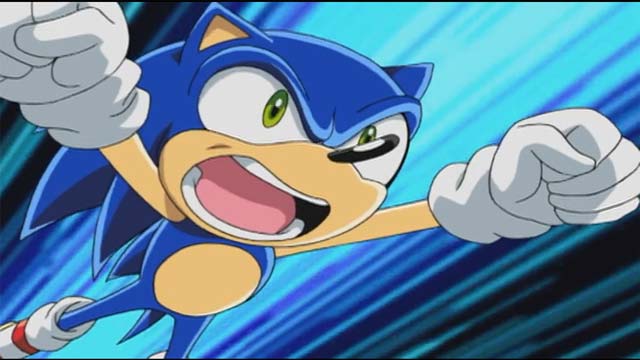 Sonic has even had his own anime: the 1996 OVA and Sonic X, the latter of which adapted the Adventure games into a literal Shonen anime. In fact, Sonic X is one of the biggest cases for considering Sonic as a Shonen protagonist, not just because Sonic is the protagonist of an anime aimed at young boys with full Shonen arcs and depictions, but because Yuji Naka has stated that the anime was closer to what the team was hoping for.

We felt the need for speed????????????. #DidYouKnow about that time when we produced the cutscenes in Sega CD's Sonic the Hedgehog CD from 1993? #ThrowbackThursday #SonicTheHedgehog ????⭕️ pic.twitter.com/rZOoUXxar9

Sonic Heroes provides further Shonen elements. The game’s manual describes Sonic as a drifter going wherever the wind takes him, adding that “he’s basically easygoing, but when he gets fired up over an injustice, his anger explodes with surprising consequences,” and Team Sonic’s plot sees Sonic out for a run as Tails and Knuckles inform him Dr. Eggman has challenged them to stop his latest scheme — Sonic’s sense of justice and Shonen-like inability to turn down a challenge leading the three to rise to the occasion.

Don’t Doubt What He Can Do 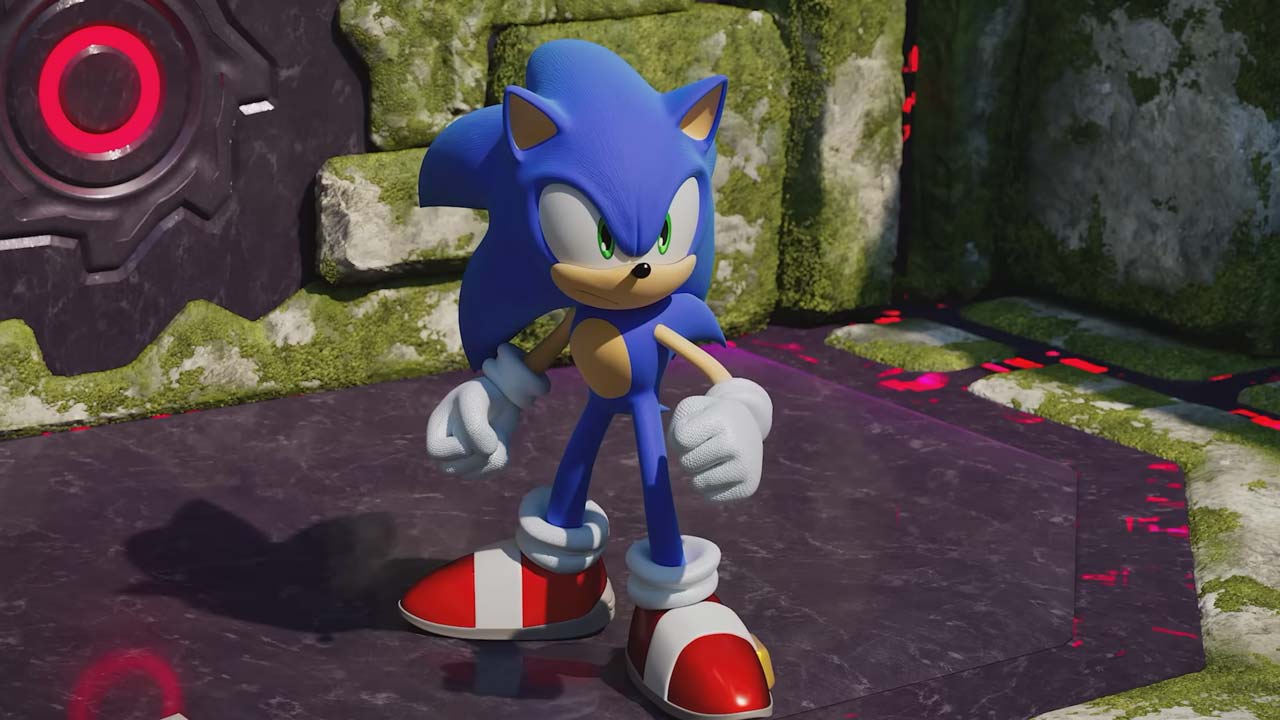 The US adaptations of Sonic also somewhat understood these aspects of the character, even if accidentally. The Saturday morning Sonic the Hedgehog DiC cartoon (known as SatAM) made Sonic part of a team of Freedom Fighters, actively fighting the injustice and oppression of Dr. Robotnik. More recently, IDW’s Sonic comics have built a world fitting a Shonen manga. The quote mentioned at the top of the piece illustrates this, and the comic sticks to this depiction of Sonic as a drifter who helps wherever he goes, but not someone who sticks around to form a superhero team.

Consider too that Shonen protagonists are often underestimated by their enemies — Sonic is, after all, just a small woodland creature — why should he give Dr. Eggman, a genius inventor with a robot army, so much trouble? It’s that exact kind of assumption that leads to Eggman’s defeat time and again — similar to how Goku is seen as a low-class Saiyan by Vegeta, how others look down on Asta for his lack of magic and how Soma Yukihara’s cooking is underestimated for being “just diner food.” Additionally, Sonic makes the world a better place around him while remaining the same during his adventures — giving him a positive flat character arc, something common to most Shonen protagonists.

Collected together, these traits paint Sonic a lot like Luffy, Goku, Naruto, Asta, Gon and many others Shonen characters. Sonic has a path he walks, values freedom, hates injustice/oppression and seeks to destroy it wherever he finds it, has a deep connection with nature, is not the most sociable person but has a kind heart underneath his ‘tude, has given misunderstood villains second chances (and accrued various rivals as a result), has multiple power transformations and greatly values his friends and loved ones. If that’s not a Shonen protagonist, I’m not sure what is.

That Time I Got Reincarnated as a Slime The Movie: Scarlet Bond Reaches 750 Million Yen in 12 Days