Time to head to MgRonald and post about it on mobtter 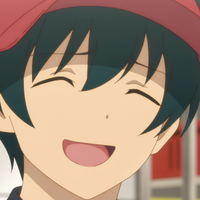 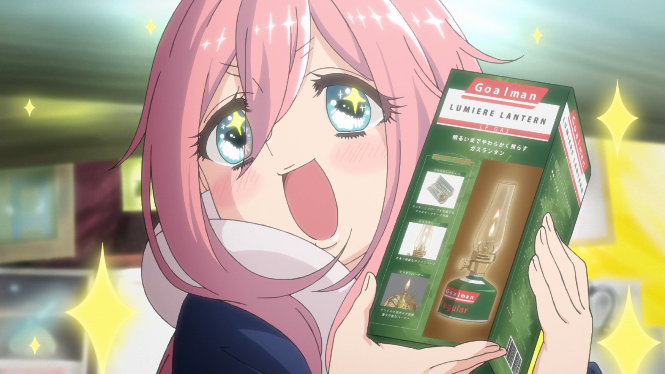 More often than not, it’s hard to find anime that feature real-life product placement or brands within a series. There are occasions where that does happen, but usually, anime has to differ from real life with regard to how it presents stores and businesses. This has led to some series finding creative ways to incorporate certain household names and their instantly recognizable logos. Let’s take a look at some of the fun, goofy, and outright hilarious ways anime has shown off the brands you know.

The Devil is a Part-Timer! - MgRonald 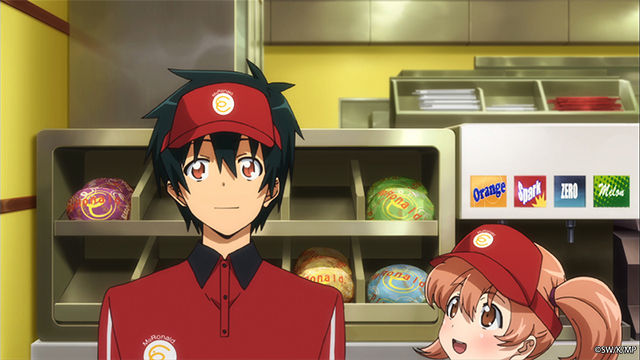 Fast food staple McDonald's has been parodied a lot in anime. A lot of series have some version of the restaurant in the background or as a place characters might go in one particular episode. “MobDonald’s” in Mob Psycho 100, “WcDonald’s” in Cowboy Bebop, if we wanted to go over all the places you can get a Happy Meal in anime, we’d be here for a long time. The Devil is a Part-Timer! takes this one step further by making it a key location within the series where multiple characters work. It’s a fun extra step that makes the parody more of an integral part of the series rather than just being a one-off gag. 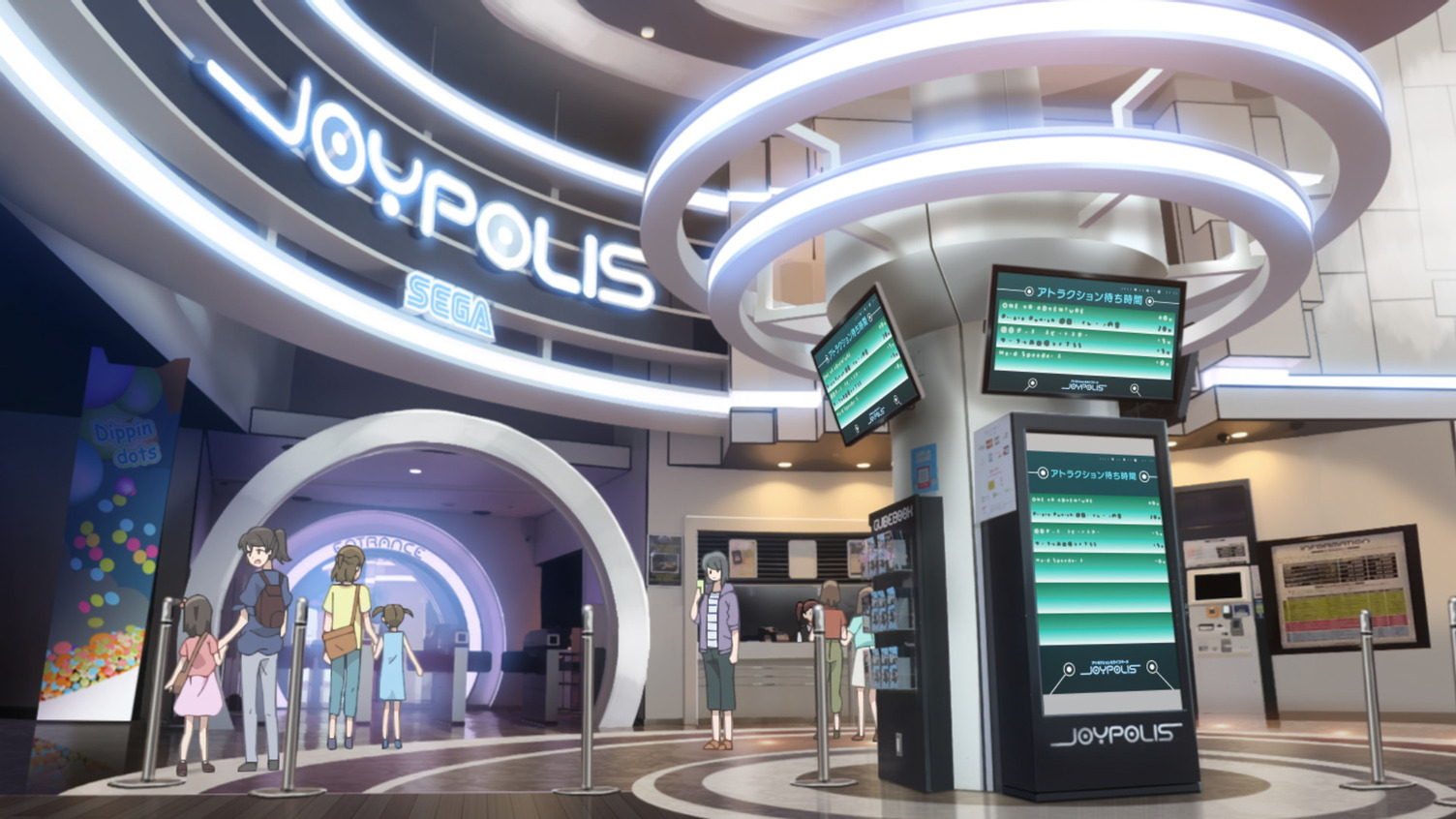 This is a funny, somewhat one-off parody that is seen a few times throughout both seasons as a way to utilize the clothing brand, Uniqlo, around the Diver City Tokyo Plaza. What makes this particular spoof intriguing is its mix of reality and anime branding. There are, of course, multiple signs on the Plaza building that utilize the Oniqlo logo, which essentially looks exactly like the Uniqlo logo if they turned that U into an O. Another key aspect of the Diver City Tokyo Plaza is that’s where the statue of the Unicorn Gundam is. Since Love Live! is produced by Sunrise, they’re able to include within the series itself where the mobile suit is in real life. While it might have been interesting to see how they could’ve done a Gundam parody here, it’s neat seeing the actual location in the series along with the clothing parody. Gundam isn't the only real-life brand to make an appearance in the anime either! The anime title is also joined by gaming giant Sega. 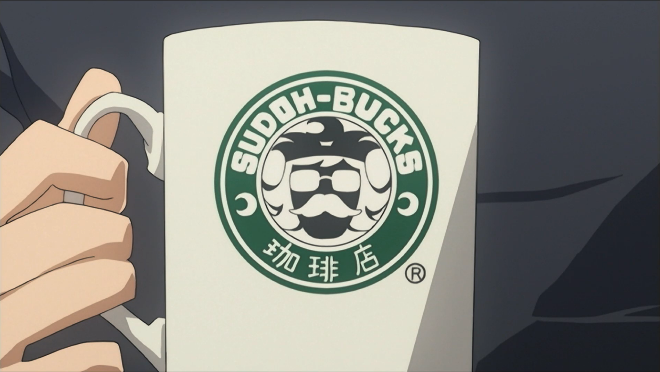 Here we have another iconic example of brand parody with Toradora’s Sudoh-bucks. Starbucks is a company that’s seen its fair share of creative reimaginings throughout anime, usually with a slight variation of its name like “Starbacchus” in Nisekoi or “Starducks” in Melody of Oblivion. “Sudoh-bucks” replaces the well-known Starbucks mermaid with a mustached character, which has stuck with fans of Toradora throughout the years – especially since the characters ask about the legality of the store because its logo is a bit too similar to Starbucks'. A good logo along with a good gag is definitely a recipe for success in creating a good brand parody in anime. 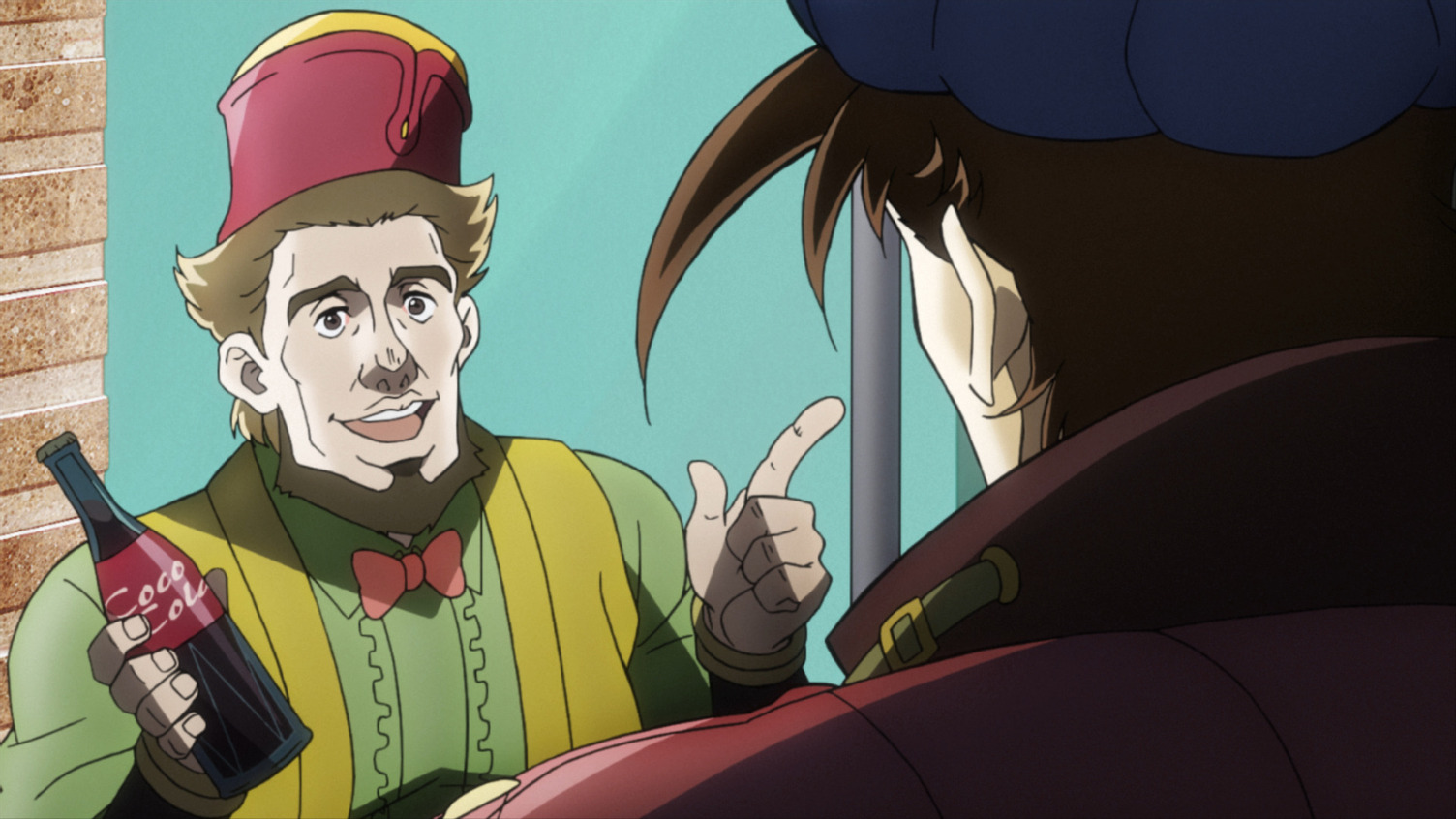 JoJo’s Bizarre Adventure having a Coca-Cola parody isn’t the most surprising thing given the nature of the series, and the way it’s utilized is pretty much what you’d expect. Part 2 of JoJo's, “Battle Tendency,” is where the series really starts to go in a very ridiculous direction, complete with an introduction of its newest protagonist, Joseph Joestar, with a crisp, refreshing glass of Coco-Cola - not to be confused with Coca. But Joseph can’t just raise a glass and take a sip. He uses his Hamon abilities to shoot the cap off the bottle and obliterate a cop’s finger in order to protect his new friend, Smokey. It’s a very Joseph solution to stopping the police from assaulting someone. 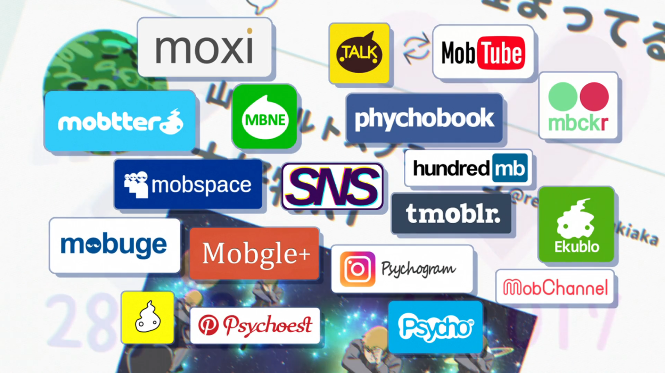 This has become more of a trend in recent years with the rise of social media and internet use in general. From “Talker” parodying “Twitter” in Inuyashiki to the number of ways to say “Google,” it makes sense that Mob Psycho 100 would do something similar. The caveat here is that Mob Pyscho 100 goes the extra mile and gives you nearly 20 parodies at once. We get the Mob Psycho 100 versions of Twitter, Facebook, MySpace, YouTube, Snapchat, Instagram, Google Plus, and more. It’s made better by the fact that they’re not just tweaking the names, but are instead incorporating Mob’s name or the word “psycho” into nearly every single company name. Be sure to share these brands on your favorite social media platform like mobtter, mobspace, and tmoblr — though I haven’t checked my mobspace in a while. 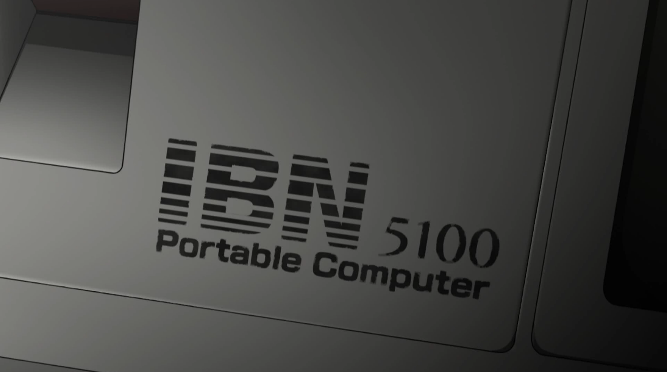 If there’s one show that really embodies the idea of creating brand parodies, it’s STEINS;GATE. There’s most famously the Dr. Pepper parody of Dk Pepper among a wealth of others. However, there’s one key item that becomes a major plot point in the series, and that’s the IBN 5100. Based on the IBM 5100 from the 1970s, the old portable computer is key to a lot of the twists, turns and reveals that occur throughout the entire series. That’s certainly a way to bring an old computer from 30+ years ago back into the forefront of computer-related culture.

RELATED: Anonymous;Code is Coming to the West in 2023 and Chaos;Head Noah Heads to PC in October 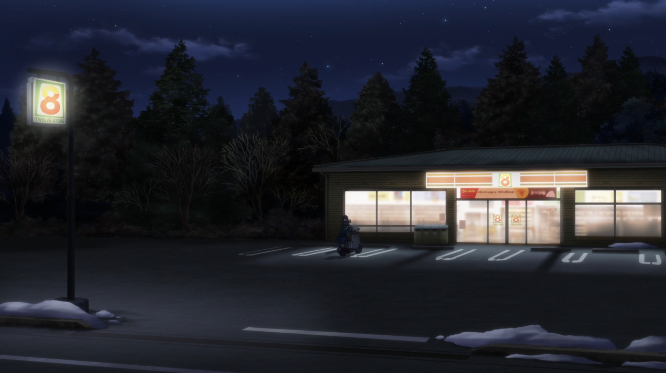 Convenience stores are prime material for anime to be creative with, especially given the sheer number of them found in Japan. There’s a multitude of ways that shows have taken the 7-Eleven branding and made it something else. An easy way to do so is what Laid-Back Camp does by just bumping up each number by one — an extra step since Haikyu!! already claimed 8/11. Since this is Laid-Back Camp we’re talking about, 8-Twelve is probably a hot spot to get all the items and necessities needed for a camping trip. Hopefully, there’s one near wherever you're camping just in case you need to make an emergency pit stop for some supplies. 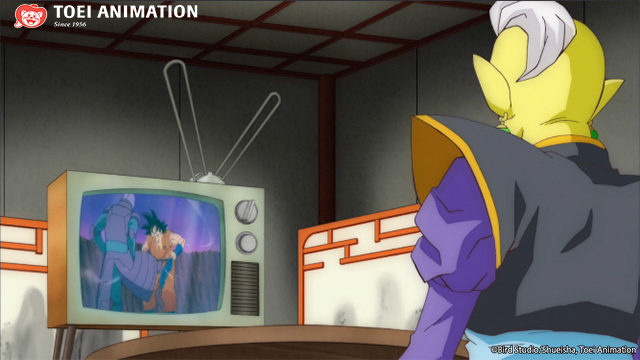 As we’ve seen earlier, more shows are branching out to create parody brands of various social media and internet platforms. The idea of social media being a thing in Dragon Ball is a strange thought given how long the series has been around, but its utilization here is a good goof. Having their version of YouTube being strictly for the various Gods of the franchise to watch is a funny way to place a video streaming service into the realm of Dragon Ball Super. Imagine Goku having to find a way to communicate with Shin, but Shin’s too busy watching a bunch of cat videos! Why wouldn’t the Gods want access to a wide variety of videos during their downtime? That being said, they generally use it to check out the latest fights happening around all the different universes.

This is only a brief look at how creative anime gets in spoofing well-known entities. We’ll certainly see more with all the new series that come out this year, next year, and as long as anime continues to operate on our IBN 5100s — or whatever device you use. I’m looking forward to seeing how they continue to change different brand logos and how they get utilized in each story. For now, I’ll be “mobtweeting” my thoughts from inside a Sudoh-bucks.

What are some of your favorite anime parodies that we didn't mention? Let me know in the comments below!