REVIEW: Parallel Worlds Slip Away in To Me, The One Who Loved You and To Every You I've Loved Before Anime Films

Read our double review of the latest movie release! 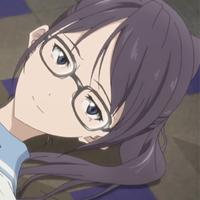 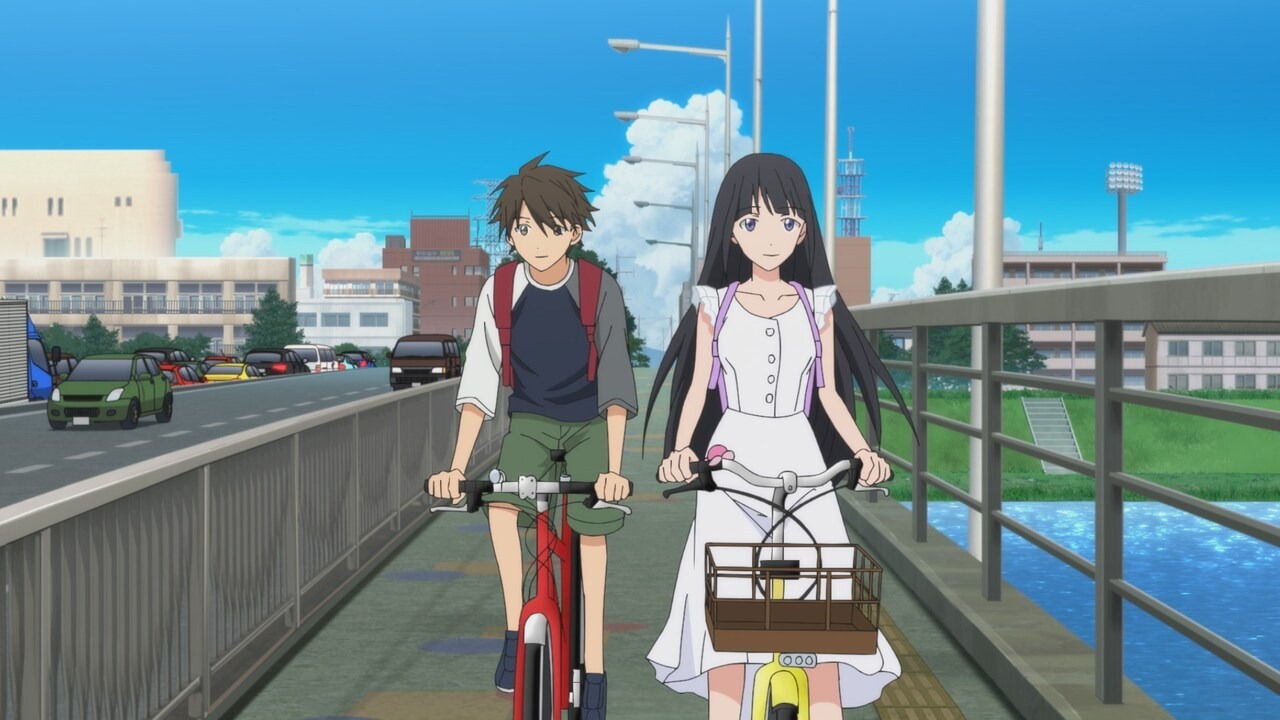 Timelines are askew in the anime film adaptations of the To Me, The One Who Loved You and To Every You I've Loved Before novels from Yomoji Otono. Two films adapting both novels were released on the same day, each revolving around the same set of characters on two different parallel worlds that interact in certain ways. Crunchyroll News sent Daryl Harding and Alicia Haddick to see each on opening day and give us a breakdown on how both outings faired and which was worth slipping through dimensions for if they were at all.

To Me, The One Who Loved You Trailer

To Every You I've Loved Before Trailer

Teenage Romance Never Dies in To Me, The One Who Loved You
(Review: Daryl Harding)

If there’s one thing that To Me, The One Who Loved You continually drives home is that no matter the goal, it’s achievable – even if that goal is getting your teenage love interest out of the interdimensional void that she’s stuck in. Following Koyomi, To Me takes viewers on a journey through his life as he tries to rectify a teenage romp that went wrong.

To Me follows Koyomi’s life as he follows his father after his parent’s divorce, influencing Koyomi to learn more about science through his Dad’s lab, while growing up with Shiori, the daughter of a fellow researcher. The two fall in love, as do their parents, who eventually marry. Not wanting to live in a world where they’re step-siblings, the two decide to use a prototype machine to travel to a parallel world and then to dire repercussions.

To Me’s story is told through time leaps and differing timelines that interact, though we don’t see the complete story without also watching To Every You I've Loved Before. Not that I think it’s needed. According to netizens who have read the novels, To Me is best experienced first in the watch order. But to me, besides missing some contextual clues on what feels like unrelated plot points, nothing is missing in this package of a film. There are moments in the film that sped summarizes To Every You’s differences, but they weren’t compelling enough to make be want to find out more about that parallel world. This Koyomi and his journey to return to Shiori is enough of a story. 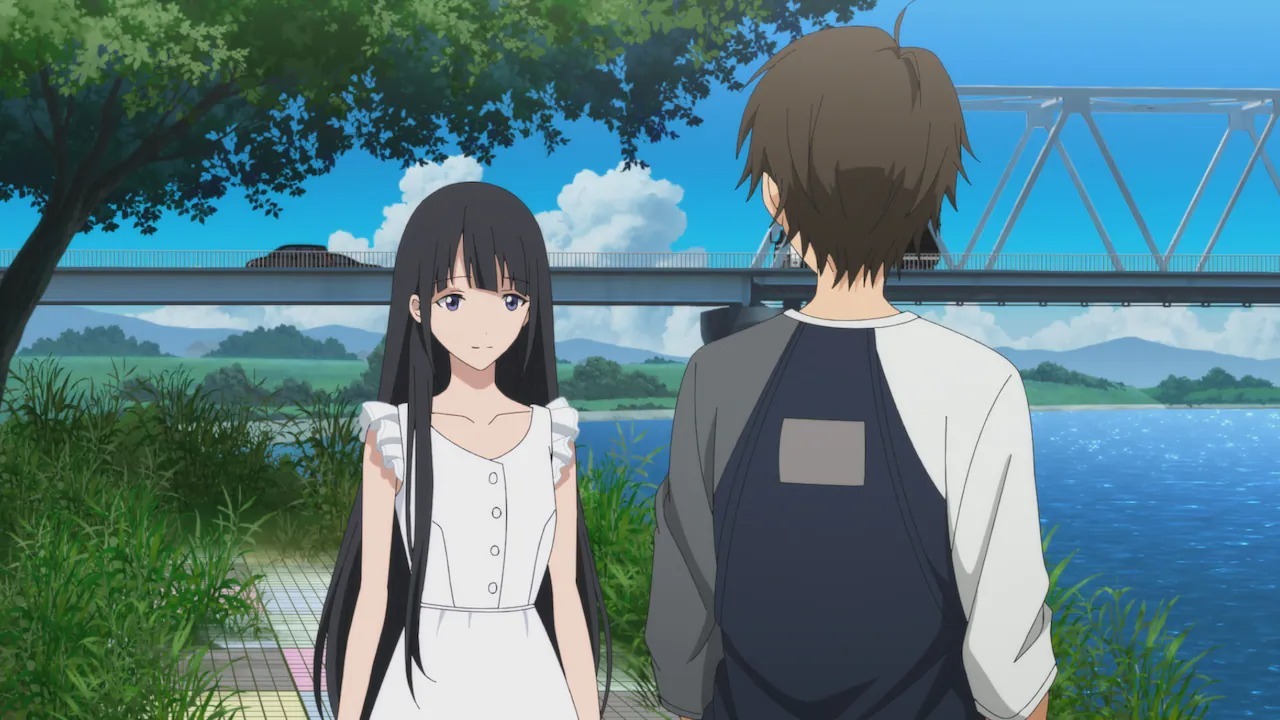 That being said, as good as the story, the concept of parallel worlds, and different movies that co-exist together are, it only works if the animation is there to support it. To Me has some great character designs – very reminiscent of Detective Conan – that are utterly underused in this lightly animated anime film. Director Kenichi Kenichi and writer Riko Sakaguchi are utterly fantastic at crafting a captivating, albeit depressing as hell, narrative that spills over to some great characterization, but fails completely at making the film interesting to look at. There are many average TV anime productions that look better than To Me.

It also doesn’t really help that all the characters sound utterly bored. The cast of both films are filled with live-action actors doing animated roles, and while I can’t speak for To Every You, Hio Miyazawa as Koyomi in To Me sounded like he didn’t want to be there at all. The only time Miyazawa’s voiced matched what Koyomi was doing was when the man was depressed and drinking himself to near death. Aju Makita as Shiori was better in this regard, but wasn’t in the film enough to make an impact. 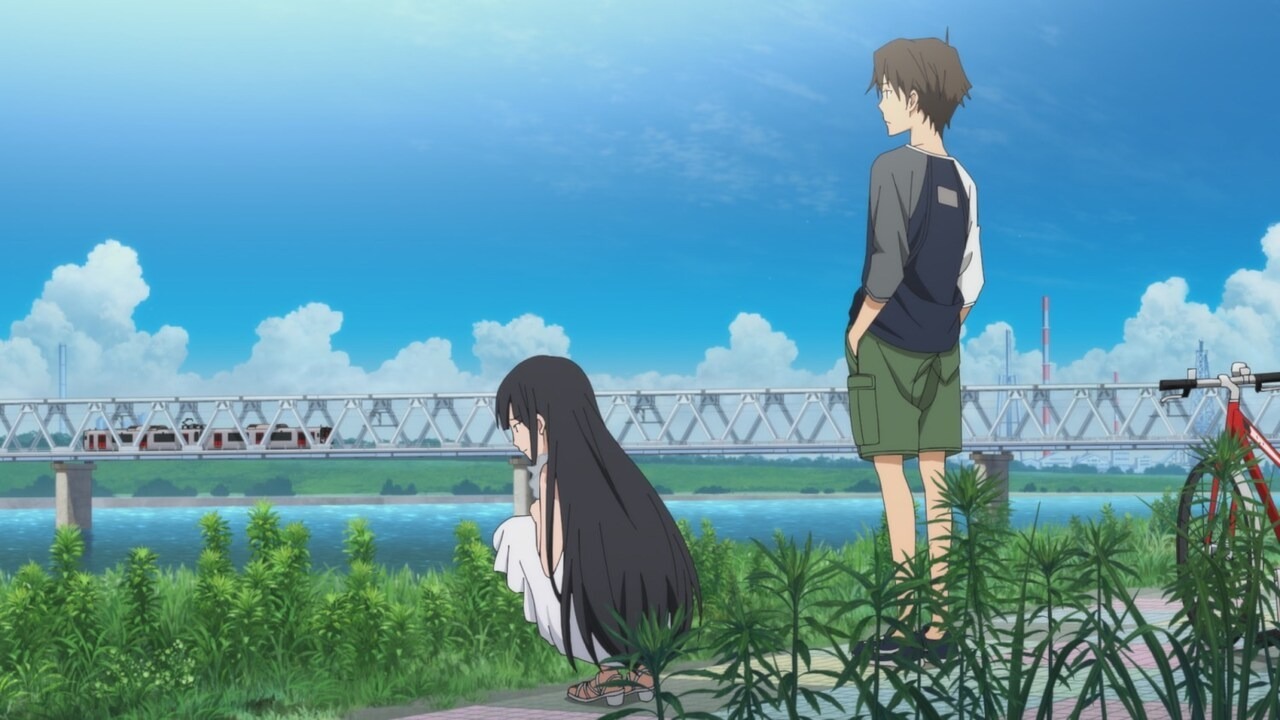 The issue with To Every You I've Loved Before is that it very much feels like the second part of a story. For all the issues Daryl noted with To Me, it’s also true you could watch that movie feeling like you saw a (mediocre) complete story. It’s about a guy who regrets the mistakes made by messing about as romantically-interested step-siblings in a machine to travel into a parallel world and constant attempts to fix them come to form a narrative.

I recap this part of To Me, The One Who Loved You’s story as it reveals a lot about the structure and story of this film that is completely absent. The aim of To Every You is to essentially counterbalance the story of To Me, with a different conclusion that, at times, brings out warming moments in a more tranquil, positive story, while ultimately feeling empty and lacking for much of its runtime.

As the title’s past tense would suggest, we start at the ending and work backward. A retired, elderly Kazune and Koyomi are happily married and living at peace until a Koyomi meets an unknown person in town. After seeing a young girl in a white dress (Shiori) that no one else can see, we travel back through our parallel universe story to put together the pieces of this sighting and understand the multiversal relationship of our two main characters. 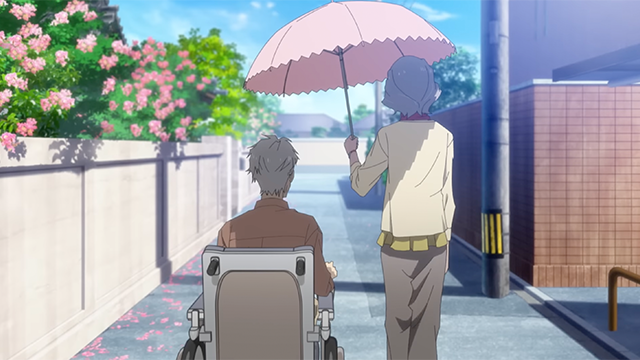 Starting from Koyomi’s childhood, the divorce of his parents signals the first major divergence. Rather than go off with his scientist father as he works on developing his parallel world machine, Koyomi goes with his mother to live with his grandparents. Our first jump through universes occurs after his grandfather dies just after they had an argument, offering one last moment to tell an alternate-universe, still alive grandparent just how much they love them, and learn how much his grandfather loves him, before being pulled back to reality, now more at peace with his sudden death.

It’s the major dividing line between these two films: if To Me is about regret in the context of their relationship, To Every You is about moving forwards from setbacks and loving the moment and people around you. Parallel universes offer a chance to see what could have been but never become a source of pain. They’re a chance to realize the importance of accepting whatever happens. 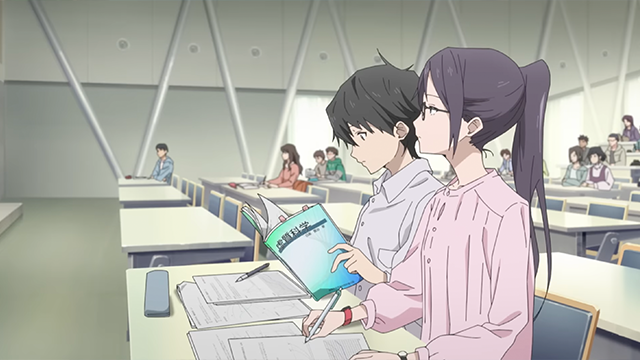 Koyomi and Kazune’s relationship is influenced by this understanding of parallel worlds and sits at the heart of this film. Koyomi and Kazune only meet in high school, with Koyomi not having many friends. Kazune then introduces the concept of parallel worlds, and it’s through this encounter they become friends, join the same company developing this technology, fall in love, and have a family.

Even its heaviest moments match this. Following a random attack on their child, the pair regret not doing more to save him from harm. Yet once a parallel-universe Kazune forcibly jumps into their universe for a chance to see their child, the understanding that their different experiences make them not the mother and child they would be in this universe serves as a chance to accept and move on. We may hold mistakes and regrets, but only by moving forwards and not trying to fix the past can we truly grow beyond it. 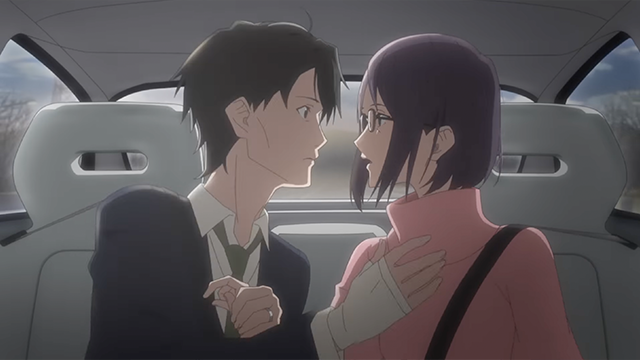 It’s an interesting conceit, poorly executed. Without the explanations offered by To Me, many story beats are awkward and unfinished, and this is before we discuss the rough animation that at times works against the movie. The introduction of elements from To Me doesn’t feel like they benefit this story, either, as they often feel forced, and a distraction from a more mature story about regret. The conclusion acting as a tying knot between these two films, showcasing the role of Kazune in both and why she finds a place in this world with Koyomi rather than her own, only makes sense with an understanding of both films, while also taking away from the more interesting story it could have told without the gimmick of two films.

Even this film’s better moments are better explored in other stories, a shame considering the potential a dual interlinked story holds.

An overriding conclusion from our dual experience is the feeling that two movies just wasn't the best choice. If one film feels complete without its second story and another feels held back by its complementary film, the entire concept falls apart. It's not unsalvageable: combining these stories into a single film or telling the story in the form of two concurrently-airing anime series in the vein of Danganronpa V3's TV anime adaptation would have better served this story and complimented each other better. The books have earned high critical acclaim, numerous awards and viral TikTok success in Japan, so it's clearly not the stories themselves holding these movies back. 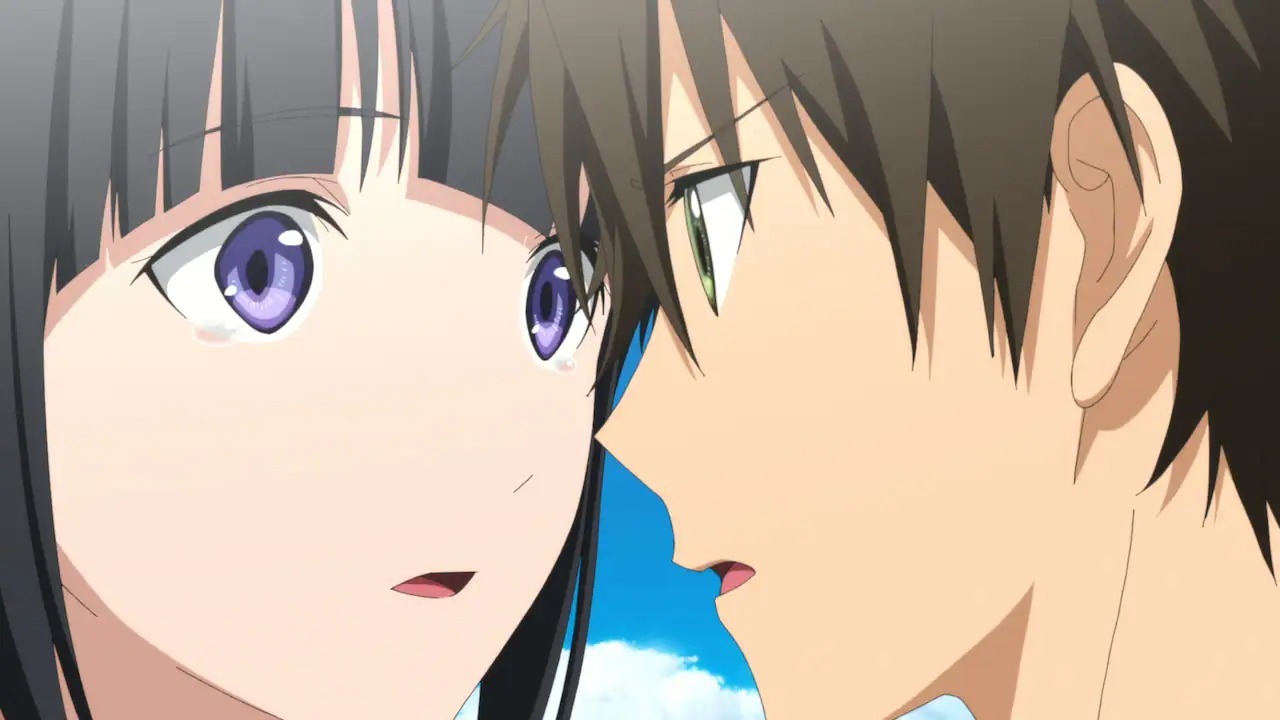 In this format, however, To Me, The One Who Loved You and To Every You I’ve Loved Before are films you shouldn't jump through parallel universes in order to watch.

Tags
to every you i've loved before, to me the one who loved you, review, kimiai, bokuai
« Previous Post
FEATURE: The Original Hellsing Anime is a Slow Burn That's Worth the Time
Next Post »
One Piece Odyssey Trailer Shows Off Extended Alabasta Gameplay
Other Top News
1 Comment
Sort by: