Turns out that they're all great! 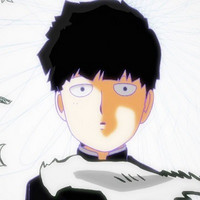 Since its debut in the summer of 2016, Mob Psycho 100 has become known as an animation powerhouse. From dizzying spectacle to emotive reactions, the series can be downright beautiful at times as it channels the inherent humane weirdness of the source material into a must-watch anime form. This carries into its collection of OPs and EDs, which serve as a sort of appendage for the franchise — they perform in sync with the strengths of the show itself, providing a set-up for its tone and thematics.

This is perhaps most apparent in “99,” the first OP from Mob Choir. Anyone that’s watched the show knows what the chant-like counting of numbers means, but while this happens, the visuals of the OP itself only get more outlandish and abstract. What starts with characters simply walking by or appearing in establishment shots unravels into rapid-fire mutation, mirroring Mob’s ascent toward the hyper-kinetic reveal of his strongest power when he hits 100.

Almost as if to counterbalance the OP, the first ED, set to “Refrain Boy” by ALL OFF, is subdued as it recounts Reigen’s morning ritual in casual snapshot fashion. If the OP paints Mob Psycho 100 through surrealism, then “Refrain Boy” is pure impressionism, not just in its brush strokes and lighting, but in the importance it places on its mellow subject matter. It’s perfect for the series, a show that marries supernatural action grandeur with the beloved connections between its misfit characters.

The second OP for the show, “99.9” by Mob Choir, comes in three sections: The first is a 3D display of Mob and Reigen, now familiar enough to the audience to be rendered in a kind of plastic and toyetic display which fits into the mood of the show without seeming kitschy. The second moves through the ever-expanding cast while the third is perhaps the stereotype we think of when we hear the phrase “anime OP” — a bunch of people jumping around and fighting. However, with Mob’s focus on distinct character design, we never lose its specific charm in the hype for its breathless action sequences.

The second ED for the series, set to “Memosepia” by Sanjou no Hana, portrays Mob in pseudo-chibi-stye with an outsized head and small frame. This goes beyond a grasp at sheer cuteness as the proportions of the bodies of Mob and the other characters bask in their childlike innocence. Most specifically, it takes a look at Mob’s endearing, quiet calmness and the gentle relationships between him and the rest of the cast. The kaleidoscope drawings almost serve as eyecatch pauses between the storybook-esque images of tranquility. At this point, it becomes clear that, just as the Mob Psycho 100 anime fluidly and effectively details some of the manga’s simpler imagery, the OPs and EDs re-translate it again through different styles of art while maintaining its core. It’s a testament to the capabilities of the series that we can see it in so many ways and all of it feels natural.

“1” by Mob Choir is the OP for the third season of Mob Psycho 100 and it doubles down on both our intimacy with the series and its characters along with our knowledge of the particulars of it. My favorite example of this is the montage and collage of hand motions, things that have appeared in the series from the espers using their amazing powers to Reigen’s hilariously spirited techniques. The OP wraps up with memorable clips of the anime’s past to form the title of the show, a fitting addition considering how much Season 3 is oriented around resolution.

Finally, we have the third ED, set to “Cobalt” by Mob Choir, one that feels like Mob’s answer to the Reigen-centric first ED. However, this one replaces Reigen’s domesticity with a dreamy sense of wonder, a feeling that’s applicable to Mob’s youth and how his character has changed over the show. By the end, the black, white, and gray settings have become imbued with full, vibrant color, another indication of Mob’s evolution.

Overall, while there’s barely been more than a handful of Mob Psycho 100 OPs and EDs to watch and enjoy, they all say something thoughtful about the series itself and there isn’t a forgettable one among them. Doing more than providing an obligatory soundtrack feature, the animation choices and styles comprehend just how attached fans have gotten to the story of Mob and Reigen and just how ripe that story is for artistic extrapolation. They function as a different way to tell the same story, taking its setting and characters to their recognizable extremes or paring them down to their most amiable selves.

tl;dr: When watching all of Mob Psycho on Crunchyroll, don’t skip the openings and endings.