FEATURE: 5 Reasons Why JoJo’s Bizarre Adventure is So Satisfying to Marathon 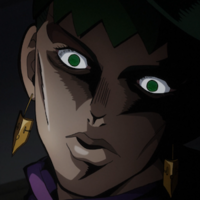 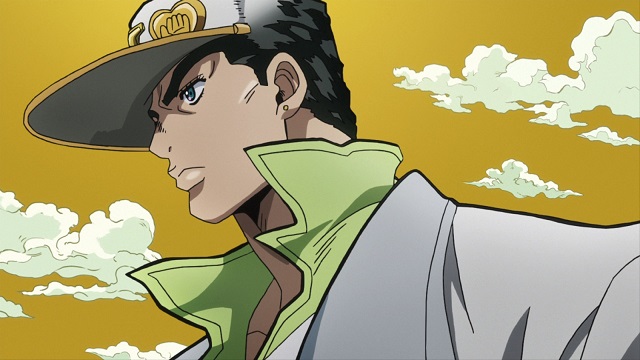 Let’s state the obvious right from the jump: JoJo’s Bizarre Adventure is indeed quite bizarre. What begins as an earnest narrative shifts and evolves into something fascinating and unique, eventually morphing into the extravagant, flippant and altogether joyous form it has become most famous for; highlighted by wild, mind-bending battles between muscular, well-dressed adversaries.

Once you get it, you really get it. It’s an influential anime for a reason. Or, several reasons, in fact, making it one that you won’t want to stop watching. If you haven’t given it a shot yet, I've got a few of those reasons at the ready. 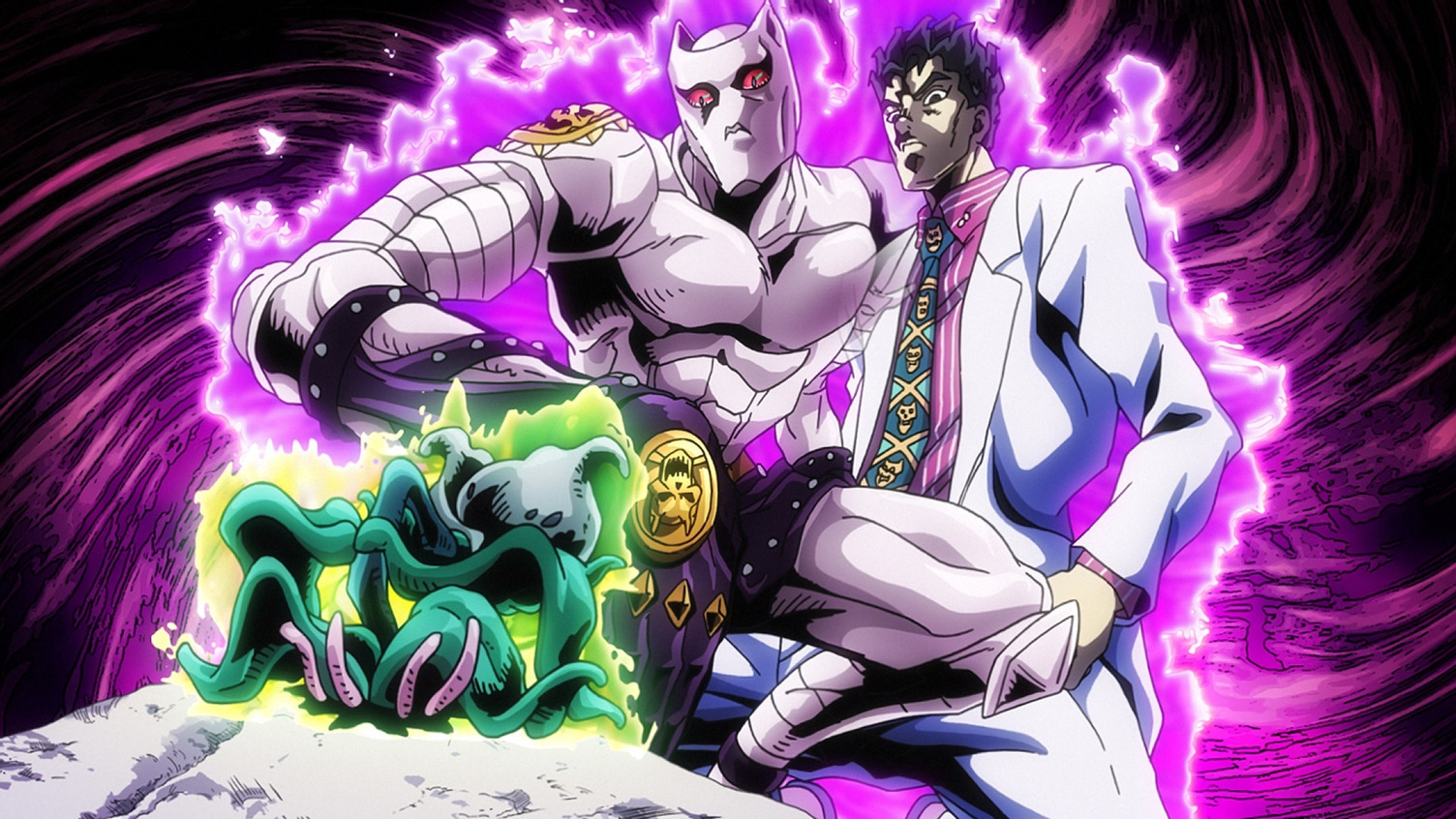 One of JoJo’s best features is its accessibility. Its major focus is to entertain, rather than challenge, offering glorious and wacky tales that take you on a raucous journey from start to finish.

This is not an anime that takes itself seriously, and as such, it lets its hair flow freely — sometimes in a hyperbolic sense, and sometimes quite literally, showcasing enviable manes that defy the laws of physics. Episodes escalate with the fervor of an overzealous poker player, constantly upping the ante and raising the stakes to dizzying heights.

When it looks as though our protagonists may finally be bested, they somehow concoct a scheme that shifts the balance their way… except when, sometimes, they don’t. Major characters can and will meet their untimely demise at any moment; a reminder that despite how fantastical these battles are, they can have very real consequences.

Any episode could prove fatal and it leaves us on the edge of our seats. It’s absolutely gripping stuff, no matter what ends up occurring. Even if it’s just a delicious meal of Italian food, which somehow pops up at various intervals. What a treat! 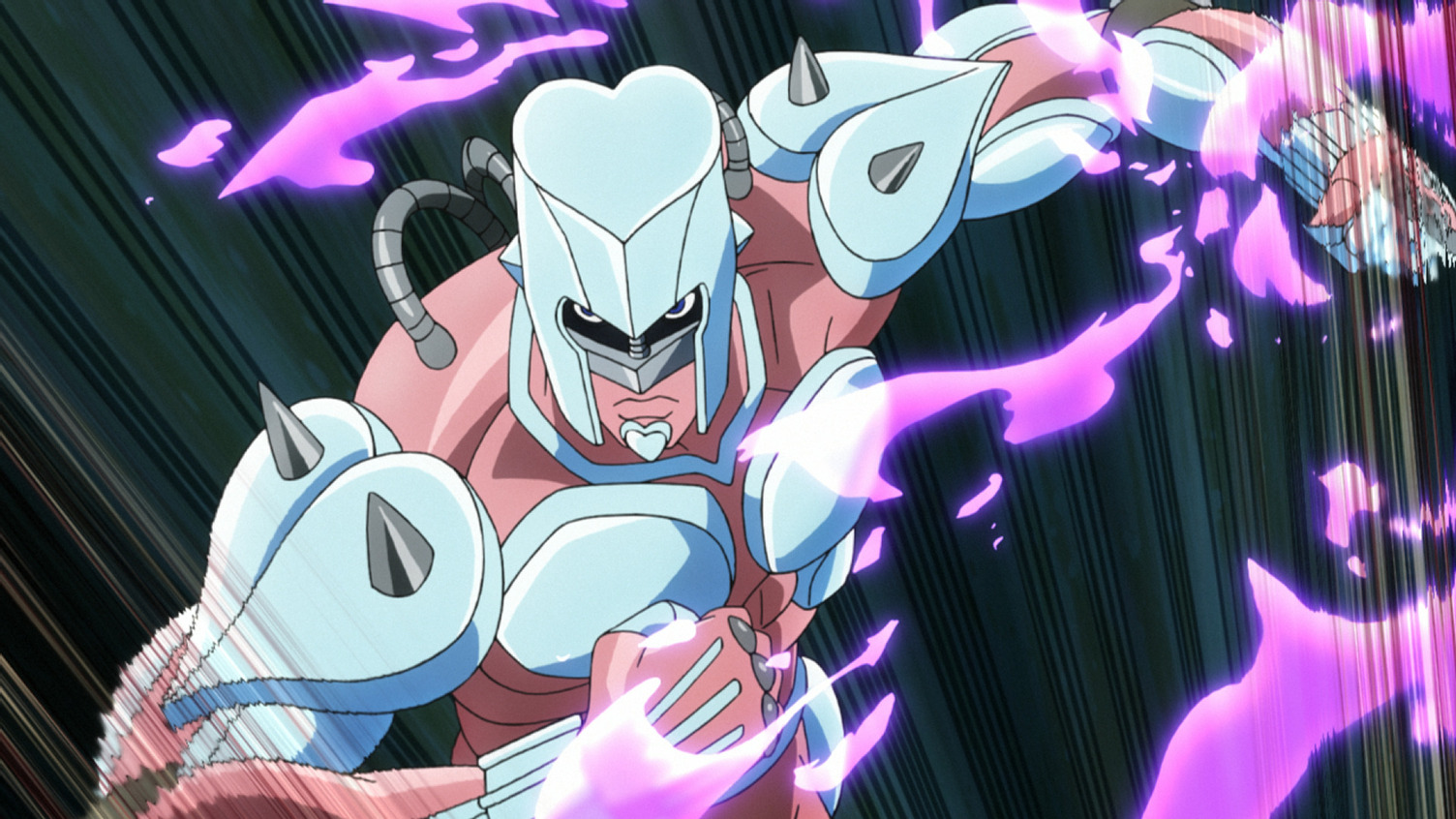 Stands may not debut until a few arcs in, but once they do, they are absolute game-changers.

Encountering a new Stand user is like solving a puzzle you’ve never even heard of before as fast as possible, and each of them has their own strengths and conditions. It’s akin to having superpowers, albeit with the caveat that you can’t be too certain who amongst the crowd might be wielding it and for what purpose.

Stands have become as synonymous with JoJo’s Bizarre Adventure as the titular JoJos themselves, and they are worth every delicious meme they have paved the way for. I simply cannot get enough of them!

With that being said, I am also team Hamon, all the way. Baron Zeppeli taught me well. 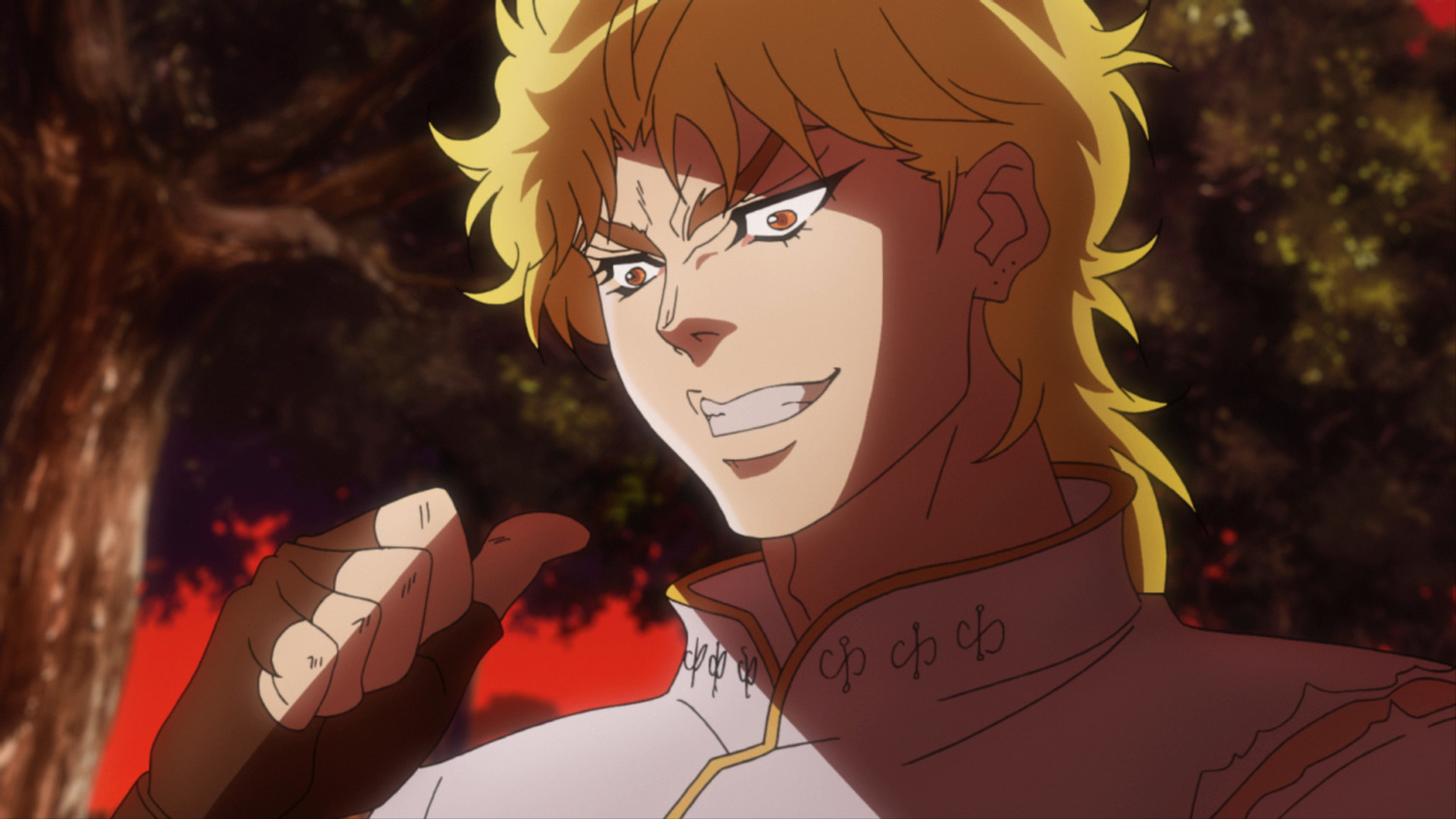 While we are on the subject of memes, this anime generates them with a ferocity unlike any other.

In lockstep with the previous two points, it is because of these exaggerated characters and their cosmic powers that we receive a new tentpole moment in every episode.

Think about it; if you were about to face off with your mortal foe, how would you position yourself? Odds are, you wouldn’t attempt such an anatomically nonsensical stance, but that’s your loss. You’ll miss out on the opportunity to be menacing.

In all seriousness (or at least as much as one can muster in relation to JoJo’s Bizarre Adventure), its stylish portrayal of the world throughout the ages makes for an unforgettable, feel-good tale. It’s hard to put into words, but easy to put onto your screen, if you want to make sense of why it’s captured so many hearts over the years.

The Shuffling of the Deck 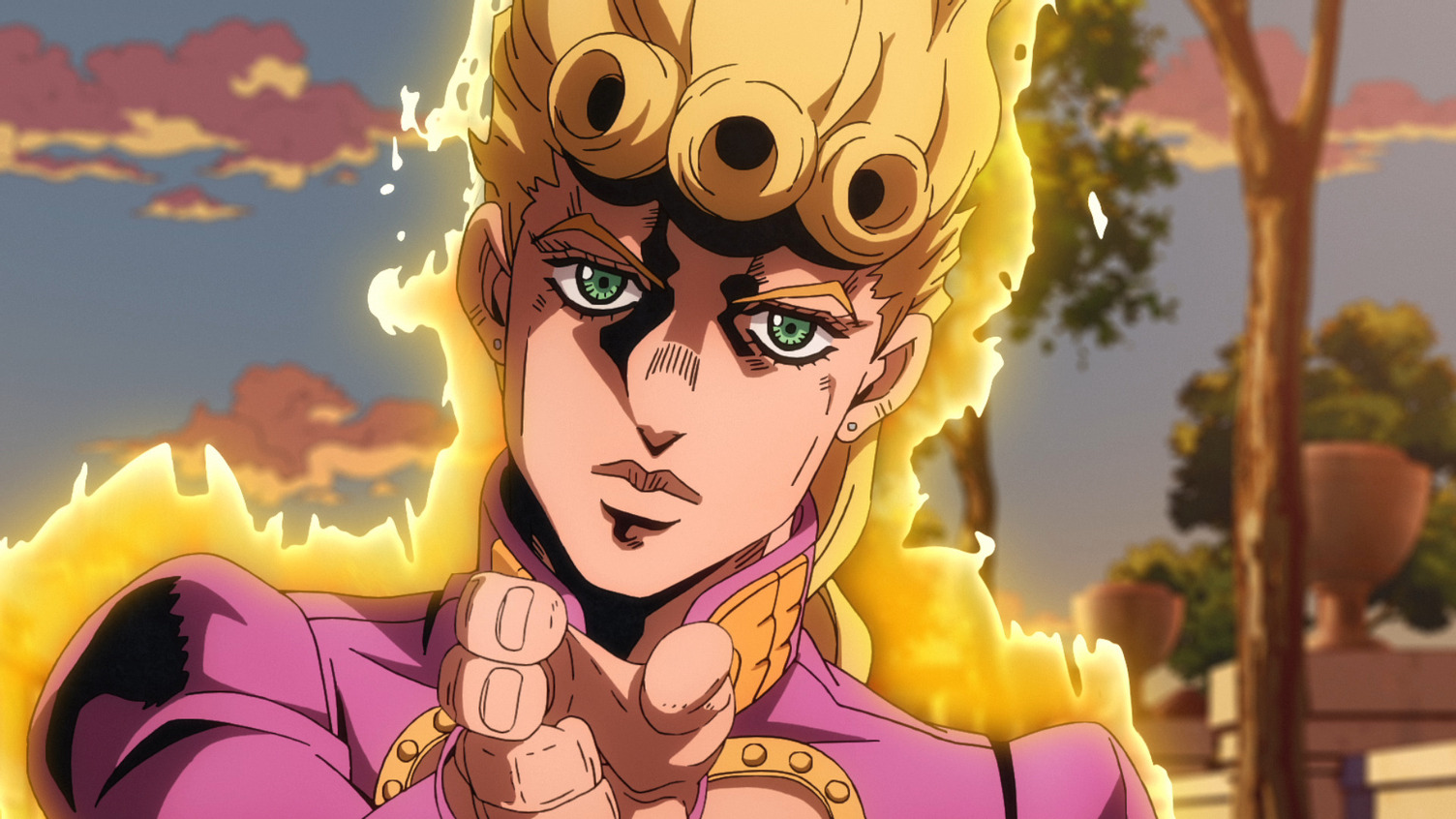 JoJo’s Bizarre Adventure does something that is truly courageous by closing the chapter on its cast with each arc’s completion.

At first glance, this might not seem impactful, until you realize you are about to receive an entirely new setting, entirely new heroes and an entirely new vibe. Whoever is carrying on the JoJo legacy will be your lead, while their allies revolve in some way around their particular temperament.

It’s almost like a reboot or a spinoff that happens every season — it is an emotional experience. It’s really hard to leave these JoJo parties behind, but you can at least take solace in the notion that you’re about to meet a fresh crew that is equally as fantastic in its own way.

And hey, maybe some familiar faces will make an appearance here and there, too…? 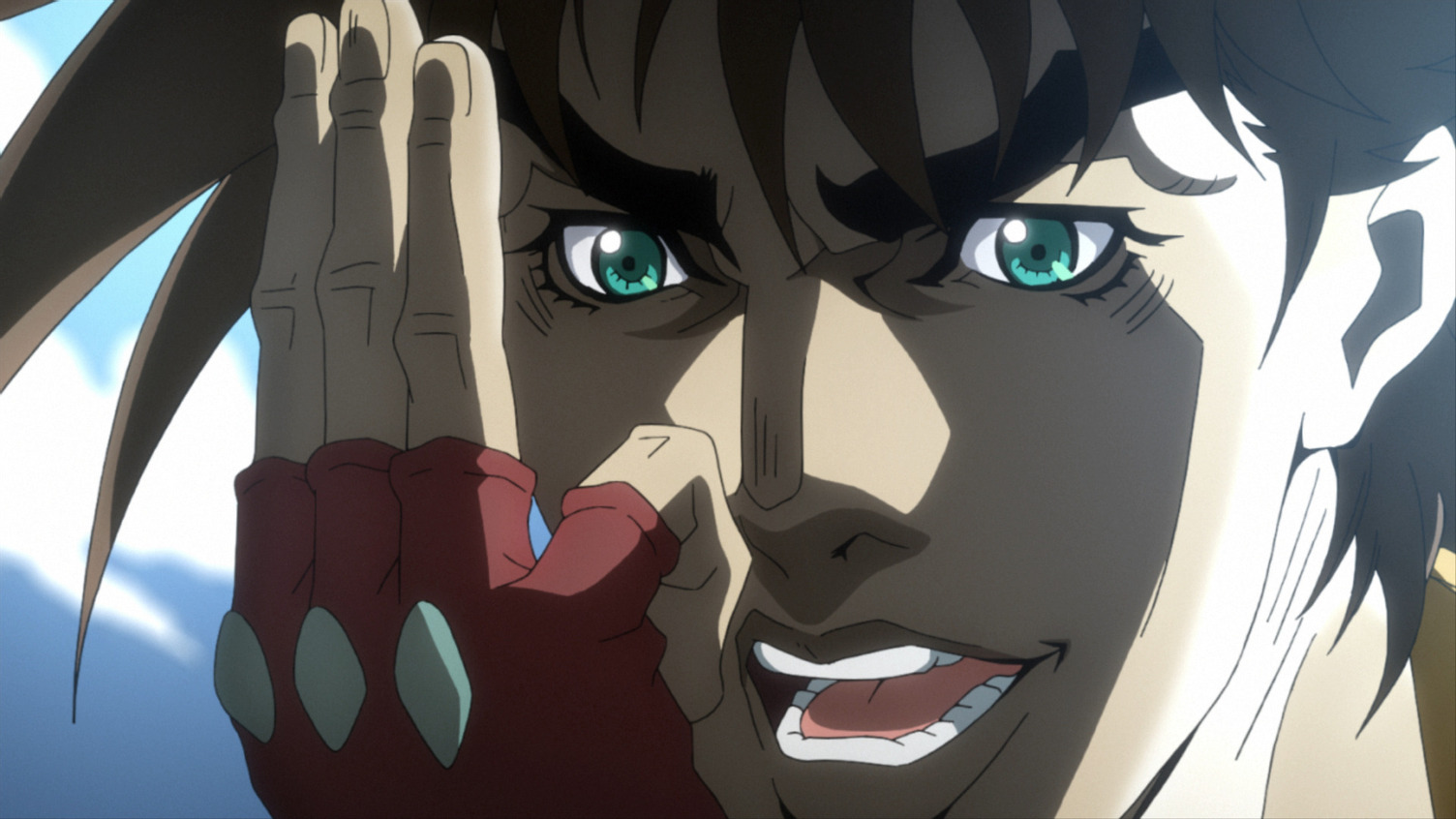 All of the JoJos throughout time are incredible in their own way, and as aforementioned, their diverse personalities really set the tone for the season they feature in.

But you just have to give a special shout-out to the second in line, Joseph Joestar, for being such an affable buffoon. In stark contrast to both the distinguished Jonathan who preceded him and the surly Jotaro who follows in his footsteps, Joseph is a loud, boorish dweeb who likes to look cool.

When he puts his mind to it, he’s a genius tactician; one who is able to revel in his victory by predicting exactly how his opponent will react to the situation. Other times, his schemes backfire in spectacular fashion and he ends up looking like the biggest stooge out there.

How will his vaunted Hamon clackers fare? The best way to find out is by watching. It’s an awe-inspiring moment, and trust me when I say, you do not want to miss it.

Long story short, should you watch JoJo’s Bizarre Adventure? If I were to look deep into your soul, I can assure you it would say… “YES YES YES YES.”