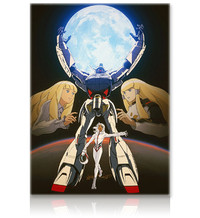 The man was arrested on April 4 on suspicion of using Share file-sharing software to upload the 50th episode of ∀Gundam which owned by Sunrise on the Internet without the copyright holders' permission. The report revealed the man had uploaded 28.000 files (300 titles) of anime and manga illegally. He stated that he wanted to make download speed steady and also wanted to be famous.