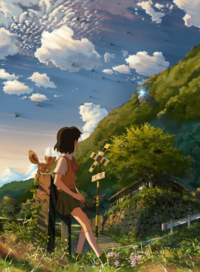 We began in creative contracting and currently engages in animated movie production, distribution and package sales as well as overseas sales.

With a small number of highly skilled people, we hope to create works that will both fully display its creators' abilities and stand the test of time.

Our mission is to work with imaginative artists to deliver heartfelt works to the people all over the world.

Other CoMix projects include

Shinkai made his mark with 2002's sci-fi informed relationship story Voices of a Distant Star. The anime followed a decidedly normal relationship between a teen boy and girl, bent by the girl serving in the anime-typical role of piloting a robot against alien adversaries. The two keep in touch through texts, but the time between messages from her grows more protracted as she travels into space at relativistic speeds. It was a nice, effecting story, told over the course of 25 minutes, taken as a real artistic statement due to the story of its production; Voices was originally written, directed and produced by Shinkai on his Power Mac G4, with characters voiced by Shinkai with his wife.

His works continued to impress with their beautifully rendered backgrounds and touching relationship stories.