The Daredevil Franchise is Born Again!

Brad Caleb Kane is hired to script the 2012 Daredevil reboot. 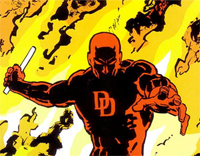 Marvel and 20th Century Fox executives have decided to hire Brad Caleb Kane to script the 2012 Daredevil reboot. Kane gained a considerable amount of buzz for his work on Brooklyn's Finest  and is a credited producer on the series Fringe. It's said that his enthusiasm for the comic helped secure his involvement in the project.

Also attached to this project is director David Slade (30 Days of Night, Hard Candy and Eclipse). This is a far cry from the 2003 film that grossed over 173 million worldwide and launched the spin-off movie, Elektra, starring Jennifer Garner. With "Born Again" as the source material, fans can expect a more serious tone to the movie. While the project is said to be in development, there are no projected filming dates or cast announcements.

Marvel and Netflix to Team Up on Four Series