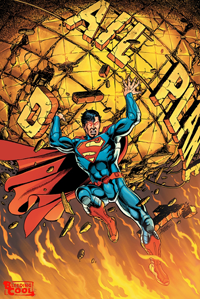 The DC Universe is starting over in the month of September. 52 issues will be renumbered to create a percise starting point for new fans as well as old. Jim Lee & Dan DiDio are promising innovative storylines featuring DC's most iconic characters. Each issue will be available in both digital and physical formats on the same day.

This first image is the Geroge Pérez cover of Superman #1. It is being widely reported that Pérez will also write the comic. This wouldn't be his first involvement with relaunching a DC title. In 1986, George Pérez wrote Wonder Woman #1.

The second image is the cover for Supergirl #1.

The third image is of Superboy #1.