Eiden and K-On! Team Up for Railway Tickets 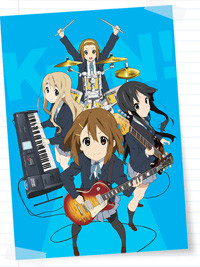 Eizan Electric Railway Co. (Eiden) and K-ON! team up to release a limited edition set of anime-inspired tickets. This five piece booklet features die-cut cardboard images of the characters and their instruments. Each piece features the shape of a guitar, keyboard, drums or bass. Fashioned after old train tickets, they are made of a hard cardboard material and are 0.6-millimeters thick. They will also be mounted on cardboard so customers can enjoy the pieces as a collector's item.

Each booklet is priced at 2,500 yen ($31). Sadly, it was announced that a total of 6,000 serial numbered sets were sold out moments after they were released.

This isn't the first time K-On! was used as a promotional tool. In the beginning of September 2010, the Kyoto prefectural government used the characters to promote the census. Sharp also created a calculator with designs of the characters.

ZEONIC TECHNICS Lets You Control a Toy Zaku with Your Mind