Interact with Haruhi and others via verbal apps 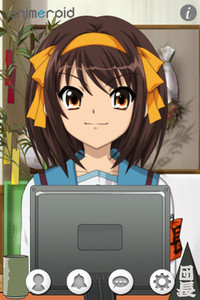 Kadokawa Shoten released Haruhi's AniPoke in Japan and overseas last week as a free download. The other two apps released, Mikuru's AniPoke and a Nagato AniPoke, however, are available for ¥115 ($0.99) for a limited time from July 7-August 31, when they will revert to their normal ¥450 ($3.99) price.

The apps also offer an alarm clock featuring the character voices and hidden commands. The Motion Portrait technology used in the Haruhi's AniPoke app was previously used in games.