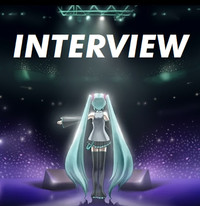 We don’t need to tell you about Hatsune Miku and the VOCALOID phenomenon. As fans, cosplayers, and future creators, you already know everything you need to. But we do need to set up this interview, so indulge us a bit…

Hiroyuki Itoh is the CEO of Crypton Future Media, and is jokingly referred to as “the father of Hatsune Miku”.

Wataru Sasaki was the developer of Character Vocal Series 01: Hatsune Miku and continues to develop the VOCALOID software.

After sneaking into a hotel lobby, they graciously agreed to answer a few questions, beginning with…

How do you think the MIKUNOPOLIS in LA concert went? Did it go as you expected?

Hiroyuki Itoh: As I expected? Well, maybe not. The concert went well.

Wataru Sasaki: I think we provided something that met the fan’s expectations. Overall, I think it wasn’t too “Americanized” or presented as American-style entertainment. It wasn’t too sophisticated, and that turned out to be a good thing.

Is Crypton looking to improve the technology used in the concerts in any way?

Hiroyuki Itoh: The concert is not “complete”. It doesn’t exist in an idealized format yet. It’s just one of the cards on the table. And how the audience will react to it is something that we can’t predict. It has an experimental aspect to it, and so does everything related to Miku.

A lot of fans were surprised by the Hatsune Miku Toyota ad campaign, which seemed to come out of nowhere. How did this collaboration originate?

Hiroyuki Itoh: The plan itself came from Toyota. We accepted their offer and replied to them with some advice. That’s how it got started.

Did you get a chance to talk to any US Miku fans at Anime Expo? What was your impression of them?

Hiroyuki Itoh: Yes, we met many fans at AX. They were already big fans of anime, so their overall reaction was very positive. Most people said, “this was great, please do it again,” those kinds of things.

What kind of company was Crypton prior to working on the VOCALOID software? How has it changed since then?

Hiroyuki Itoh: Crypton had been making software related to sound and was working as a distributor for music software that was manufactured outside of Japan. We imported, distributed, and localized these kinds of  products for the Japanese market. Since we started doing VOCALOID, we’ve added a wider range of services. We now do music distribution, music publishing, and provide services to creators who make illustrations, characters, and video clips mostly related to Hatsune Miku. So after Miku, we started offering services for non-music creators.

Were there any interesting ideas or concepts for Hatsune Miku that were abandoned before the final version was released?

Hiroyuki Itoh: Yes, there were many early variations, such as clothing and music. But we simply didn’t have enough time, so we had to give up on some of the music.

Was any research done to see how users would respond to the voice of Hatsune Miku?

Wataru Sasaki: I’m sure there must be someone who has very specific tastes; someone who only likes a robot-style voice. Vocaloid does have a robot voice, but normal people might think, “what is this unnatural voice?” Using a voice actor’s voice – which is already “not normal” – and mixing it with a robotic kind of voice, of course it will end up as a very unique sound. By contrast, if you add a robot voice to a good singer’s voice, it sounds much more normal. I wanted to aim for a voice that was cute, but robotic, and in the end result was still cute.

There’s been some talk from fans who really want to see a VOCALOID anime, while others think the characters are fine now without a continuing story. Where do you stand on the idea of expanding the characters and their world?

Wataru Sasaki: Anime is made by old men (“ojisan” is the word he uses - PM). I think that Miku fan’s imaginations and the people who think about Miku’s different songs and styles are way more creative than anime. I have so much expectation for the young generation and I want Miku to be a container for the energy of those people. We don’t need anime because I think the fan’s creativity is at a higher level than anime. I want to keep the fans aware of that fact.

A lot of people are looking forward to the debut of VOCALOID software for other languages including English. What are some of the challenges in creating it?

What has surprised you the most about the Miku phenomenon?

Hiroyuki Itoh: It’s only been about ten years since people started using the internet. And I think we are still in the process of discovering what can be done with it. During the process of distributing the internet to people, many things and industries will be replaced by newer forms. For example: music, e-commerce, or social networking sites like Facebook. Maybe an older institution like the telephone will shift into a totally new industry sometime soon. I won’t say that Hatsune Miku may destroy the music industry, but…I am looking forward to making some kind of impact. I feel like we are involved with something very new. I want Miku to be some kind of symbol or icon for the changing of industries. For the sake of a bright future, I hope that Miku will be recognized for that.

Wataru Sasaki: Right now, a lot of young people are consuming energy drinks and playing games on the internet. But who made the game they play? The game producer. But who ends up making money? Maybe the owner of the company. The more kids there are enjoying a game, spending their money on it, the more old guys, who have nothing to do with making their entertainment, wind up making money. I simply think that’s not cool. People that you don’t know, people that the game user has no relationship with; the more you spend your money, they gain your money. That’s a fact. This leads to a situation where it is harder and harder for creators to make a living. So, to create a good situation for creators and producers means to offer good entertainment that a lot of young people enjoy. That’s why redefining what “entertainment business” means is needed now. This is the part that we need to change the world about.