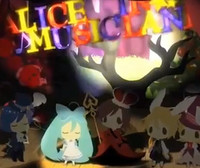 Alice in Musicland, a project teased this past February by longtime Vocaloid artist, Oster Project, is a new animated musical that mashes up Vocaloids with the familiar characters from Lewis Carroll's Alice in Wonderland, resulting in a work that is able to appeal not only to Vocaloid fans, but anyone with an appreciation for the happiness music can bring.

Check out Hatsune Miku (with her various Append software vocal tones taken full advatange of) and company singing all original songs that show the "petite philosophies" of daily life:

Oster Project is best known for her Vocaloid works "Koi Suru Vocaloid," "Miracle Paint," and "Trick and Treat," but her profile points out that she she also composes themes for net games and material meant for people to sing. The songs that make up Alice in Musicland appear on her fourth album, Cinnamon Philosophy, released last October.

Thanks to Crunchyroll user, kingmetaknight1, for the tip!