Anyone Else Thinking Durarara? 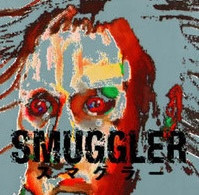 From Tokyopop's description of their release of the manga

The smugglers in our tale--guys who have to clean up the bodies after mob assassinations in which heads get ripped off--are a cold-hearted silent veteran, an old man, and a young guy forced to do dirty work to pay back money he owes the mob.
When the young smuggler makes a mistake by allowing a captured rival to escape, the price he must pay for his error gets horrifically high...