Bandai Visual aims for the top with new footage and more 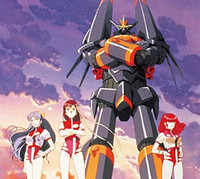 Anyone searching for the ultimate version of Gainax's 1988 OVA, Aim for the Top! Gunbuster, need look no further than Bandai Visual's upcoming Blu-ray. Along with the expected remastering, the set also includes a new short movie and more.

This box marks the first home video release of Gunbuster's 5.1-channel soundtrack, with the option of the original 2-channel track included. Footage of the OVA was remastered through a Gainax-supervised telecine transfer from the original film stock.

The real monster is the complete edition, which adds a 115-minute disc of bonus material, with an untrimmed version of episode 6, a rough telecine transfer of episode 5 (used for recording the episode's dialogue), footage from video magazine Denei Teigoku and VHD magazine Anime Vision, production materials, and bonus material originally included in the Gunbuster Perfect release.

Both sets release in Japan on February 24, 2012. Importers, be on the lookout!

6 Anime Theories for What the Black Hole Photo Actually Is