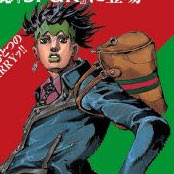 Spur's October issue goes on sale in Japan this week, and that features a 16 page, full color one-shot in which super powered manga artist Rohan travels to Florence, Italy with a handbag that had been his grandmother's keepsake.

Araki's involvement with handbags continues with contributions to an exhibition commemorating the 90th anniversary of founding the brand Gucci being held starting September 17th at Tokyo's Shinjuku Gucci.  This will feature Rohan manga reprints, original illustrations of Gucci's fall/winter lines, as well as an installation of life size figures.