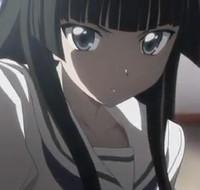 Based on Asaura's series of comedy light novels, Ben-To is ready to premiere in Japan this fall. The second promo started streaming on Ben-To's official website, but you can check it out in YouTube embed form below.

Ben-To's story centers on poor high school student Yo Sato. One day, while at the supermarket, Sato discovers a half-price bento (boxed meal), but falls unconscious just as he goes to grab it. Sato, you're now officially knee deep in the "supermarket survival battle" for half-price bento!