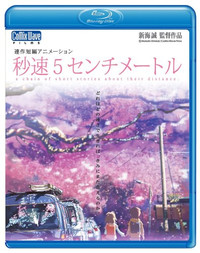 Amazon Japan is now listing a 5 Centimeters Per Second: Global Edition Blu-ray to be released on November 11th, 2011 by CoMix Wave Films for 6825 yen (approximately $90 USD). For the main feature, 5 Centimeters Per Second, the blu-ray will include both Japanese and English audio and subtitles in 11 languages: Japanese, English, Korean, Mandarin, Thai, Indonesian, Italian, Spanish, German, Portuguese, and Arabic.

The release will also include uncut standard definition versions of Voices of a Distant Star (Hoshi no Koe), and the 5 minute work She and Her Cat as extras. While the description lists the release as region free, Amazon Japan lists the disc as a Region A coded blu-ray.

The full specs from the Amazon listing below:

She and Her Cat (5min version)
Audio: Japanese / Subtitle: English

(Special features are all in SD size.)
(The interview is abridged version of the content on DVD/DVD BOX of the film.)