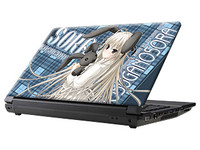 DIGICRAFT CORPORATION, an IT company in Tokyo, is now accepting pre-orders for their new laptop computer featuring Moe characters from an adult visual novel/TV anime series "Yosuga no Sora". The laptop, also called "Moe Note PC", is preloaded with system voices and wallpapers of the various girls of the series. The "Premium Model" is priced at 248,000 yen (US$3,234) and the "Normal Model" is 150,000 yen (US$1,956). They are available by Internet order only in Japan.

"Yosuga no Sora" is originally an adult visual novel developed by Sphere, which was released for Windows PC on December 5, 2008, then was adapted into a TV anime series in October-December 2010.

"IT Anthropomorphic Project" Web Anime Explores Life in the Database