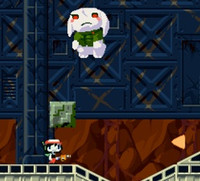 Included in this version: the option of playing with the updated graphics and soundtrack featured in the WiiWare release, a new "Wind Fortress" level designed by Amaya, a Boss Rush mode and more. There's also promise of additional content in the future, so this definitely seems like a computer version of Cave Story worth paying for.

Cave Story will run you $10 on the Mac App Store, and the announcement of a Steam release is hinted at for another date. Also, don't forget about NIS America's release of Cave Story 3D, which hits Nintendo 3DS this November.