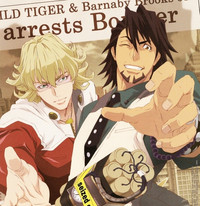 Update: via Otakomu, an event page appears to be up at the official site with more details. The first part of this new project is Tiger & Bunny Hero Awards 2011, an event planned by Sunrise and Bandai Visual, and put on by Bandai Namco Live Creative.

Update: The Tiger & Bunny Twitter account just confirmed! There will be an event November 13th at a hall in Kanagawa to kick off "NEXT PROJECT," whatever it may be.

The official news site is not loading for us currently, so count this as perhaps unconfirmed at the moment, but it appears that Tiger & Bunny will be getting either a season 2 or some sort of spin-off project, as reported by Otakomu and Otanews: