Prepare for the moe makeover you never expected 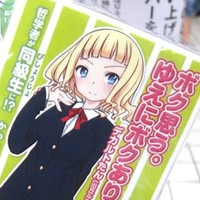 Just on the off chance you've found yourself wondering what your most beloved European philosophers would look like as anime girls, author Junji Hotta has you covered. His book, Tsundere, Heidegger, and Me, went on sale September 14, and you can see its moe spin on Descartes, Spinoza and more below.

The book is centered on a character who suffers a fatal accident, only to be reincarnated as a high school student and summoned by the seven featured philosophers for a little after-school learning. Below, you'll find the book's depictions of its subjects, along with their corresponding chapter titles.

Baruch Spinoza (“Chapter 2, Spinoza: man is the greatest for man”)

Immanuel Kant (“Chapter 4, Kant: the starry heaven above me and morality within me”)

Friedrich Nietzsche (“Chapter 6, Nietzsche: God is dead, but nothing has changed”)

ITmedia describes the book's version of Martin Heidegger, subject of the final chapter—“Chapter 7, Heidegger: without a world, we do not exist, without us, the world does not exist, we are not alone"—as "a long-haired cultural club leader." Here's a group shot:

Who wants to study some philosophy now?