Miles Morales Swings into Action After the Death of Peter Parker 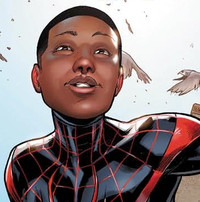 After the death of Peter Parker in the Ultimate Comics Universe, many fans were outraged and anxious to see how Brian Michael Bendis would resurrect the popular franchise. Enter Miles Morales, a Brookyln teenager of African American and Latino decent. After being released on September 14, Ultimate Comics Spider-Man #1 went on to break digital sales records for the publisher.

“I am completely humbled by the support and success of Mr. Miles Morales in both print and digital” said writer, Brian Michael Bendis. “Nothing frustrates an author more than his work not being able to get into the hands of the people that want it, and now with the Marvel Comics app we can!”

Marvel's Comic App was designed for the iPhone and iPad and allows users to read new and back issued copies of their favorite titles. While the selection is still limited, more and more popular series are being released simultaniously with their print editions.

“We’ve been doing the day and date comics for about a year now since the launch of ULTIMATE COMICS THOR #1, and each subsequent release has not only seen increased sales within the app, but we’ve also seen a great trend in which the print comic reorders increase exponentially,” added David Gabriel, SVP of Sales. “We’ve been pushing to make ULTIMATE COMICS SPIDER-MAN our top release to date, and the results we’ve seen both here and in print certainly show us that we’re heading in the right direction.”

Comic book fans can purchase the relaunch on Marvel's digital application or at your local comic book retailer.

What do you think about Spider-Man's new direction? Let us know your thoughts.
More on Marvel.com: http://marvel.com/news/story/16661/ultimate_comics_spider-man_1_breaks_digital_comics_record#ixzz1YJaq1Zz6