Subtitled episodes available for free for a week 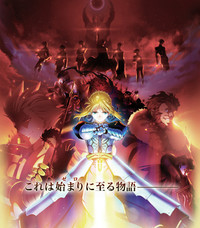 Aniplex and NicoNico Douga parent company Niwango have jointly announced that they will be streaming the fall anime series Fate/Zero on NicoNico Douga subtitled in 8 languages starting on October 2nd at 1am JST (12pm EDT, 9am PDT). Each episode will be streamed for free for a week and will be available worldwide, except Japan, with subtitles available in English, Spanish, French, German, Italian, Korean, and Chinese (Simplified and Traditional). From episode 2 on, episodes will begin streaming Sundays at 12:30am JST (11:30pm EDT, 8:30am PDT).

Episodes will be available on the official NicoNico Douga channel: http://ch.nicovideo.jp/channel/fate-zero

The story starts from zero, a beginning…

The Holy Grail War - in this ultimate battle field, in order to obtain the power of the "Holy Grail" that makes
one's any unattainable wish, seven "masters" summon "servants" and fight against each other until the last
one survives….

Hoping to win the battle, each master is heading to the new battlefield called "Fuyuki". However, there is a
man who is confused and struggling being unable to find a meaning of the war -- his name is Kirei Kotomine.
He wonders why he is appointed to this task, but without any answer, he encounters his archrival - his name
is Kiritsugu Emiya, a master who craves for the miracle Holy Grail most of all.

The untold truth of "the Fourth Holy Grail War" that had occurred 10 years before "Fate/stay night" --- the
truth about the battle fought by Shiro's adopted father, Rin's father and young Kirei Kotomine is about to
reveal!!