Production I.G. x CLAMP project gets its date on the big screen 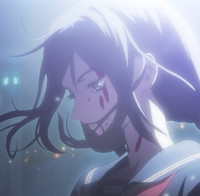 At the end of today's final TV episode of Blood-C, it was announced that the Blood-C movie will premiere June 2nd, 2012. The movie had been announced with the TV series as part of the Blood-C project, but had only been dated "To Premiere in 2012."

Blood-C is a collaboration between Production I.G., who created the Blood franchise, and manga artist group CLAMP, who are providing the story and character designs. The 12 episode TV series premiered in July.