New series to stream every Saturday at 8:30 pm PDT 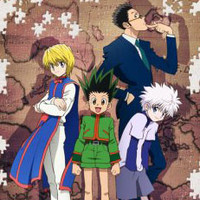 Fans of Yoshihiro Togashi's Hunter x Hunter will no doubt be clearing some time on their Saturday schedules, as Crunchyroll has announced the addition of the new anime adaptation to its fall lineup.

The series debuts in Japan on October 2, which means you can catch the first episode this Saturday on Crunchyroll. Hunter x Hunter will be simulcast 60 minutes after broadcast every Saturday at 8:30 pm PDT.

Hunter x Hunter follows Gon, a young boy who lives on Whale Island, full of ambition to become a Hunter like his father. Thus, he departs on a journey to become a Pro Hunter, and meets other Hunter exam applicants—like Kurapika, Leorio, and Killua—throughout his dangerous quest.