Guilty Crown to be simulcast starting in October 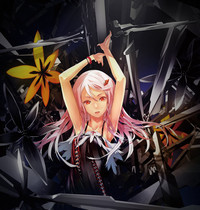 At their Anime Weekend Atlanta Panel streamed over Nico Nico Live, FUNimation announced the licenses to the 3 episode .hack//Quantum OVA and the Fall noitaminA series Guilty Crown. FUNimation will be releasing the .hack//Quantum OVAs on DVD and BD in early 2012. FUNimation will be simulcasting Guilty Crown starting October 13th, the same date as the Japanese broadcast, and will also be releasing the series on DVD and BD in 2012.

The Production I.G. produced Guilty Crown is directed by Tetsuro Araki (Death Note, High School of the Dead).  The series script supervisor is Hiroyuki Yoshino (Macross Frontier), while original character designs are created by redjuice, the artist best known as the illustrator for the music group, Supercell. Supercell's musician, Ryo, is composing the music.

The anime is set in Japan in 2039, 10 years after the "Apocalypse Virus" devastated the land. A multinational orgnization known as GHQ brings the lawless country under control, but at the price of Japan's sovereignty. One day, an unsociable 17-year-old high school student named Shū encounters Inori Yuzuriha, a female singer who is part of the resistance to liberate Japan. Together with Gai Tsutsugami (Shū's 17-year-old rival who is a young "Jiikundō" pilot in the resistance), Shū and Inori fight with mysterious innate abilities known as "imperial powers."

FUNimation will also simulcast the series starting the same date as its Japanese broadcast debut.

The action fantasy .hack//Quantum is an anime adaptation of the .hack role-playing games created by Bandai Namco Games. This three episode OVA is  animated by Kinema Citrus Studio and directed by Masaki Tachibana (Tokyo Magnitude 8.0).

Tobias, Mary, and Sakuya are way into the world’s largest online fantasy role-playing game known as The World R:X. Together, they form an inseparable group, grinding toward the break of day and running dungeons in search of the artifacts of adventure. But when the trio becomes lost in this virtual labyrinth, a chance encounter with the mysterious entity known only as Hermit will change their lives forever. There’s an eerie darkness spreading across The World, and once you stumble in, you may never make it out.


FUNimation Entertainment will release the OVA in early 2012.

FUNimation also announced they will be beginning their subscription service, called the Elite Subscription, starting in October. Elite members get anime in HD and commercial free, uncut and exclusive series, English dubs on the release dates, and more for $7.95/month.

During the Q&A, it was mentioned that they still have not gotten materials for the Geneon shows that were licensed at AX in 2010, they are in negotiations for more One Piece, they do not have plans for Rainbow on DVD yet, and they have not gotten additional rights for more D.Gray-man.