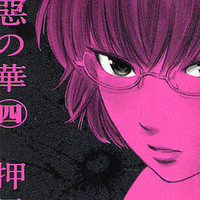 North American publisher Verical announced during their Anime Weekend Atlanta convention panel that the company has licensed the rights to Shuzou Oshimi's 2009 ongoing manga series Flowers of Evil (Aku no Hana).  Vertical plans to release the manga every other month startiing in May 2012.

Takao Kusuga steals a pair gym clothes of the girl he likes, the next day the girl that sits behind him reveals that she saw everything. Now if he doesn't form a "contract" with her, she is going to tell.