Apple Co-Founder Passes Away One Day After iPhone 4S Announcement 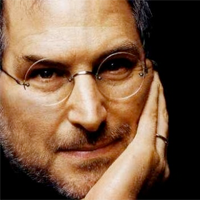 Steve Jobs built his reputation as a visionary by steering left when the rest of the world wanted to go straight. His death, while shocking, was not surprising to anyone following his battle with pancreatic cancer. Even in the midst of battling several complications from his illness, Steve Jobs was able to produce one more marvel to cement his status as one of the most influential minds in modern day technology.

It's impossible to discuss the legacy of Steve Jobs without defining the monstrous impact of Apple Inc. Each one of his accomplishments helped to revolutionize entire industries. The Apple II changed the face of personal computing and paved the way for almost every computer hardware manufacturer. The iPod and iTunes calmed the troubled waters of pirated music and created a new standard for the digital distribution of media. This standard helped pave the way for Netflix, Hulu and even Crunchyroll.com. The iPhone changed the face of cell phones by placing mini-computers in the pockets of the average consumer. Finally, the iPad took the personal computer and transformed it into a consumer electronic for the entire family. These products may have their faults, but they forced other companies to change their way of thinking. At the end of the day, Steve Jobs' legacy isn't what he helped create, but the impact his creations had on its users.

Apple Computers was founded in 1976 with the lofty ambition of putting technology in homes and schools. The idea was to create a computing station that was easy to use for the entire family. This philosophy would carry over to each one of his successful inventions. What's more impressive than Steve Job's many triumphs is his multiple setbacks. After failing to boost sales, Jobs was removed from the company he helped start. Several years later, he returned as a consultant and then eventually secured his former position of Chief Executive Officer in 1997. This would be the beginning of a slew of innovations that built the Apple Inc. empire to currently have over a 10% share of the U.S. PC market. (Apple's U.S. Market Share Trend: 1Q06-4Q10 (Gartner)

In 1997 after a triumphant return to Apple Computers, Steve Jobs led a team of engineers that developed a series of one-piece computers that were marketed to have edge and a fashion forward design. These similar designs are just being implemented by many of Apple's competitors as of 2009.

In 2001, Jobs persuaded companies to sell music online through their Itunes store. In conjunction with the iPod, Apple cornered the market for digital music.

In 2003, Steve Jobs was diagnosed with a rare form of pancreatic cancer. During his absence, rumors of a new Apple product started to surface. Four years later, the iPhone was introduced to sold out AT&T and Apple Stores across the country.

Even in the face of continued illness and nervous share holders, Steve Jobs introduced One More Thing. The iPad was released in 2010, breathing life into the fledgling tablet industry. Apple never claimed to invent any of these technologies, but they do get credit for making most of America care.

Outside of Apple Inc, Steve Jobs co-founded Pixar Animation Studios in 1986 and sat on Disney's board of directors after the company was purchased in 2006.

Here are a few statements from notable voices as they remember the life of Steve Jobs.

"I'm truly saddened to learn of Steve Jobs' death. Melinda and I extend our sincere condolences to his family and friends, and to everyone Steve has touched through his work. Steve and I first met nearly 30 years ago, and have been colleagues, competitors and friends over the course of more than half our lives. For those of us lucky enough to get to work with him, it's been an insanely great honor. I will miss Steve immensely." - Microsoft Chairman Bill Gates

"Michelle and I are saddened to learn of the passing of Steve Jobs. Steve was among the greatest of American innovators - brave enough to think differently, bold enough to believe he could change the world, and talented enough to do it." - President Barack Obama

"Steve, thank you for being a mentor and a friend. Thanks for showing that what you build can change the world. I will miss you." - Facebook CEO, Mark Zuckerberg

"Today, we lost one of the most influential thinkers, creators and entrepreneurs of all time. Steve Jobs was simply the greatest CEO of his generation. While I am deeply saddened by his passing, I'm reminded of the stunning impact he had in revolutionizing the way people consume media and entertainment. My heart goes out to his family and to everyone who had the opportunity to work beside him in bringing his many visions to life." - News Corp. CEO Rupert Murdoch

"Once in a rare while, somebody comes along who doesnt just raise the bar, they create an entirely new standard of measurement." - Twitter CEO, Dick Costolo

"Apple has lost a visionary and creative genius, and the world has lost an amazing human being. Those of us who have been fortunate enough to know and work with Steve have lost a dear friend and an inspiring mentor. Steve leaves behind a company that only he could have built, and his spirit will forever be the foundation of Apple." - Apple CEO Tim Cook

Apple is planning a celebration of Steve Job's life for their employees and have offered an official email address for the public to share their condolences, thoughts and memories. [email protected].