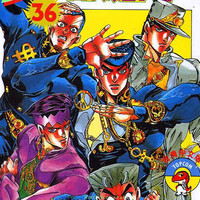 Rohan Kishibe has starred in Jojo's short story spin-offs "Thus spoke Kishibe Rohan," "Under Execution,Under Jailbreak," and, most notably, "Rohan at the Louvre" - tied to exhibit at the French art museum.

Previously we had a look at the window displays.  Now, via Gigazine, take a look inside.

Using key chain figures, Morio, of "Diamond is Unbreakable" and the new, currently running eigth incarnation "JojoLion" was created in Banpresto's Jojorama (Jojo's diarama)  for display at The 25 Prize Fair.

FEATURE: Which Word Would These 7 Anime Characters Play First In Wordle?