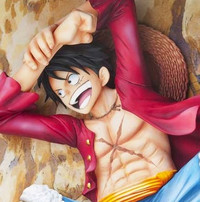 To mark the One Piece anime's recent transition into its "New World" phase, pre-orders are now being taken for an upcoming PushOne 3D framed scene of the redesigned Straw Hat Pirates.  The diorama will go on sale in January for 9980 yen ($130.00).

Prior to the "New World" Straw Hats, a 3D framed portrait captured Luffy's mentor Shanks and his Red Hair Pirate.