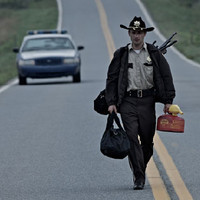 The adaptation of Robert Kirkman's zombie comic The Walking Dead returns to AMC for its second season on Sunday, October 16th. The wait might have been brutal for fans, but that's been nothing compared to the bloodbath that took place behind the scenes since season one, which even took out series' show runner Frank Darabont (The Mist). Judge whether a Darabont-less The Walking Dead is any less harsh for Rick Grimes and his fellow survivors in a two minute clip.