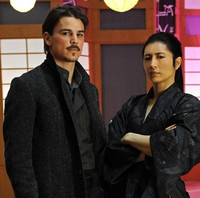 Bunraku—the Japanese puppet theater inspired Western/Eastern starring GACKT and Josh Hartnett—was nothing if not distinctive. With such an unusual project, you can typically expect an unusual opening credit sequence, and this one didn't fail to deliver. Thanks to the segment's director, Guilherme Marcondes, you can now see the opening for the movie online.

Also from Guilherme Marcondes, a TV spot for The Sun's promotion in partnership with Lego: