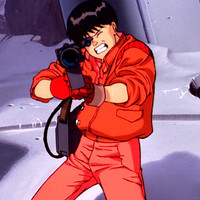 It's been a long time in the decision-making, but Warner has agreed to the production of Akira, a live-action adaptation of the always-brought-up anime movie and manga series.  Akira has been announced as a "potential tentpole project," meaning that it's expected to generate quite a bit of money over a financial season, assuming it succeeds.

Horror director Jaume Collet-Sera (House of Wax, Unknown) has been marked to direct after The Book of Eli's Albert Hughes left the project earlier this year.  Leonardo DiCaprio, fresh off diving into dreams in Inception and walking 'round in women's underwear in J. Edgar, is set to produce via his Appian Way production house.

At least one key change from the original is present in a brief summary given:

"Set in New Manhattan, the cyberpunk sci-fi epic follows the leader of a biker gang who must save his friend, discovered with potentially destructive psychokinetic abilities, from government medical experiments."