Is "G Reko" the New Gundam? 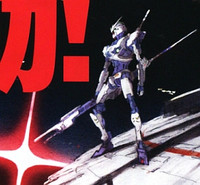 Early last September, it was announced that Mobile Suit Gundam creator Yoshiyuki Tomino was working on a new SF project called G Reko. Now, the Mechadamashii web site has turned up a new magazine image regarding this mystery proejct, which Mechadamashii claims is "the new Yoshiyuki Tomino anime set over a 1000 years in the UC timeline's future".

Here's a translation of the text that appears on the page itself, giving away lots of clues about G-Reko's staff and premise.

Animator, Illustrator. Entered Studio Ghibli in '90. Freelancer as of '99. Beginning with Turn A Gundam, worked on the genga production for multiple productions. Character designer for Eureka 7.

Hearing Director Tomino's idea, his friend Yoshida Kenichi drew this illustration on his own. The structure is... a space elevator? Standing there is a human? Or is it...."

IS IT GUNDAM?!??! JUST COME OUT AND TELL US! AND WHAT'S ON THE OTHER PAGE??? Ok, stay tuned to Crunchy News for more info on G Reko as it develops. In the meantime, we are doing the happy dance over a new Tomino project in the works...