Wobbling Pirate Ships Go On Sale in Japan This Month 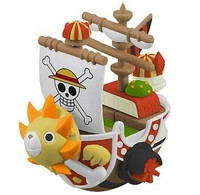 The days go by, seasons change, years pass, but one thing remains constant: the One Piece goods just keep on coming! Now, Japanese figure maker Megahouse is about to unleash detailed miniature versions of the famed pirate ships featured in this much-loved anime and manga set to be released this month.

This third collection in Megahouse’s “One Piece Wobbling Pirate Ship Collection” series offers six new super-deformed ships at a price of 525 yen each (about US$7.00). Each comes with a clear stand that allows the ships to rise and fall as if sailing on the seven seas.

Megahouse’s Mr. Takakura, in charge of the line’s development, says of the collection, “When you mention a pirate ship, you think of something a man might like. But this super deformed collection will also appeal to women and children”. Now how about you?

CAPE Shares A Message of Support for the AAPI Community