I don't think it's fair to say that it's like Watership Down, but with cats 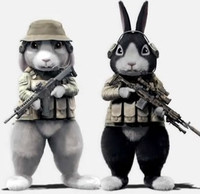 Cats are the official animal of the internet.  Equal parts capricious, loving, and downright sadistic, cats can even make a dedicated dog person like myself stop and give them a well-deserved "awwww."  Now, all you cat lovers can look forward to an animated adaptation of Tad Williams' fantasy novel Tailchaser's Song, focusing on how feral cats view other species as well as their distrust toward humans, or M'an, from animation team IDA (International Digital Artists), who gained worldwide recognition and acclaim with their adaptation of Motofumi Kobayashi's military manga Cat Shit One.

Yes, that's this one, which is basically a Tom Clancy or Richard Marcinko novel told with bunnies and camels engaged in shockingly realistic gunfights.  It makes me pretty much assume that Tad Williams' take on epic fantasy with feral cats is going to be just as good, if not better.  What do you think?