Based on the new Wii game "The Legend of Zelda: Skyward Sword" 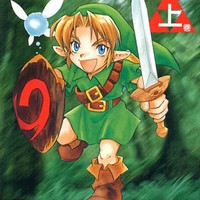 Akira Himekawa's official Twitter account and the January 2012 issue of Nintendo Dream magazine revealed yesterday that now Himekawa, a duo of female manga artists, are working on a new manga adaptation of the popular game franchise The Legend of Zelda. The manga is loosely based on the newest game The Legend of Zelda: Skyward Sword. This is the 11th Zelda manga adaptation by Himekawa.

The magazine published the 2-page interview with Himekawa on page 100 and 101. They announced the manga will be published by Shogakukan in near future and introduced two rough sketch pages from the up-coming manga.

The female manga duo have drawn 10 volumes of The Legend of Zelda manga so far. Their manga

series have been sold more than 1 million copies in Japan and at least more than 500,000 copies in

North America, according to Nielsen Bookscan.