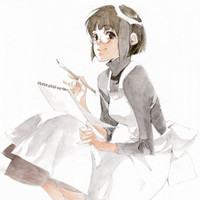 Itsuya-San follows a magical art teacher who travels to a small community, where she begins solving the complex problems of her students and their families.