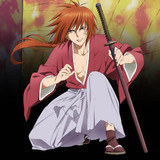 The first half of the new OVA Rurouni Kenshin: Shin Kyoto-Hen is set to debut in Japanese theaters on December 17, ahead of its home video release. Kazuhiro Furuhashi (the prior Kenshin anime, Chevalier D'Eon) directs the new adaptation of the samurai series' most popular storyline, based on a script from Mari Okada (Fractale, Horo Musuko, Hanasaku Iroha ).

Tags
kenshin
« Previous Post
VIDEO: Check out This Amazing "Legend of Zelda" Hyrule Room
Next Post »
"My Sweet Umadonna" is Actually a Game
Other Top News
16 Comments
Sort by: