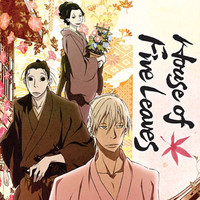 House of Five Leaves follows the story of a ronin, Masanosuke, working as a bodyguard in Edo. Because of his shy personality, he kept being let go from his bodyguard jobs despite his magnificent sword skills. While he was wandering around town he met a man, the playboy who calls himself Yaichi. He hires Masanosuke as his bodyguard. Masanosuke soon finds out that Yaichi is the leader of a group of kidnappers who call themselves the “Five Leaves.” The story unfolds as Masanosuke deals with his dilemma and the suspense surrounding the Five Leaves.