Featuring the life-size figures of the K-ON! characters 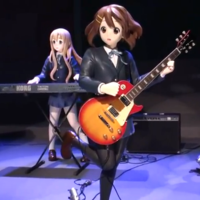 To celebrate the theatrical release of the K-ON! film in Japan, the amusement park Universal Studios Japan have been hosting a special "K-ON! in Universal Studios Japan" event since November 28. The event features the life-size figures of all the members of the "Ho-kago Tea Time" band. Thankfully, a person named yo3shi5ki2 has posted a 3 minutes 32 seconds video report of the figure exhibition on YouTube. Check the details of the K-ON! figures.

Inside of the exhibition

Outside of the exhibition

Have a Delicious "Resident Evil" Brains Dinner at Universal Japan