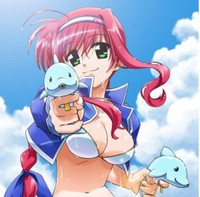 Magical Girl Lyrical Nanoha A's Portable: The Gears of Destiny—a follow-up to last year's The Battle of Aces—is ready to strike PSP in Japan on December 22, along with a slew of costumes from Namco Bandai's roster of titles, including Xenosaga and Katamari Damacy. Watch the latest promotion video below.

New costumes can be unlocked by spending Lyrical points earned in the fighting game, and they range from swimsuits to a variety of Namco Bandai cameos. If you missed them in the video, here are some costume samples, from Xenosaga's KOS-MOS to Katamari Damacy's The Prince, and even the lovable star of Klonoa.