The next tale of souls and swords is almost upon us 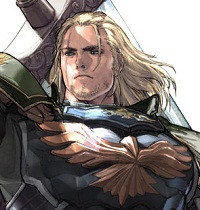 From returning characters to fresh faces to a certain Italian assassin, the excitement for SoulCalibur V is building!  A cinematic trailer for the game has been released, showing off the final battle from SoulCalibur IV between series regular Siegfried against the appropriately-named Nightmare... and a hint at more?

I have a confession to make: I don't like SoulCalibur very much.  Or more accurately, I absolutely loved SoulEdge (SoulBlade once it came on the PS1), SoulCalibur, and SoulCalibur II--and promptly fell out of love with the series upon playing SoulCalibur III.  The fourth game didn't do much to try and win me over, especially with Street Fighter IV on the horizon.

But with the band of action-minded lunatics at CyberConnect2 handling the Story Mode, all the interesting new additions and characters I've seen, and the fact that Ivy is somehow wearing more clothes in this one than in her SCIV design, I'm ready to jump back in.  What about you?