Released for the PSP in December of 2010 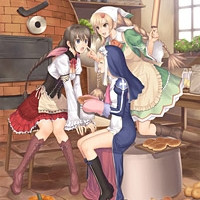 It had been previously rumored based on a 2ch leak that there would be a new Shining series anime by Production I.G, but it claimed to include both Shining Hearts and the upcoming Shining Blade. Shining Hearts was originally released for the PSP in December of 2010 and is getting a priced down re-release this month in Japan.

Update: Removed a sentence about character designer Tony being on stage. Had misread a Nico comment.