Gainax animated series to in the this Spring 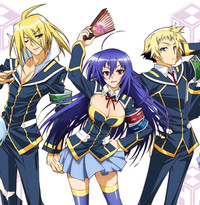 The official website for the April 2012 TV anime series Medaka Box opened up earlier with a teaser splash image and a few new details. First announced at the an event at Jump Festa, Medaka will be voiced by Aki Toyosaki (Yui in K-on!) while Zenkichi will be voiced by Yuuki Ono (Kaname in Kimi to Boku).

Medaka Box will be animated by Gainax, directed by Shouji Saeki (He is My Master, This Ugly Yet Beautiful World) and with character designs by Ikuo Kuwana.