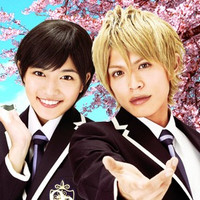 Bisco Hatori's original manga is about how Haruhi ends up being the one (secretly) female of Ouran High School's host club to pay off a debt after breaking an expensive vase. The boys eventually find out she's a she, but they keep it a secret from everyone else so she can keep entertaining girls.

In this new cell phone mini-series, Ouran High School Host Club ~Haruhi no Happy Birthday Daisakusen~, four five minute episodes tell the story of how Haruhi...quits the club (?!?) over a birthday misunderstanding. Episodes unfold starting January 6th on AU phones via LISMO Drama, but you can check out the trailer on YouTube:

In addition to the manga being released in English by Viz, you may also be familiar with Ouran High School Host Club via the anime, which was released by FUNimation as a two-part box set in 2008-09. A live action feature film hits Japanese theaters March 17th.

Exquisite Anime to Watch During Springtime