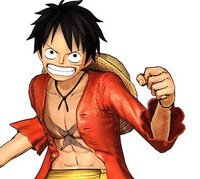 One Piece is one of the few shounen manga series that can work well in a Musou/Dynasty Warriors-style video game format. Sure, almost all of the memorable showdowns are one-on-one duels, but every now and then you get a scene where the Strawhats go berserk and take on a whole army just to mix things up a bit.

With the TV spot from a few days ago and our hands-on impressions from JumpFesta, we got to see Luffy doing exactly that as he punches through crowds of Marines, but a new trailer shows off three new playable characters: swordsman and de facto first mate Roronoa Zoro, would-be ladies' man cook Sanji, and official Strawhat sniper and legend-in-his-own-mind Usopp, with scenes from early in the series such as the Floating Restaurant Baratie and the Decisive Battle at Arlong Park.

Out of the three, I think Usopp seems like he'd be the most fun to play, with his long-range combat and a diabolical bag of tricks. What do you think? Any Strawhats you're looking forward to seeing, or maybe side characters like Smoker and Tashigi?

VIDEO: Over 4 Minutes of "One Piece Pirate Warriors" Action