Honestly, these seem a lot more appealing than any number of HD remakes 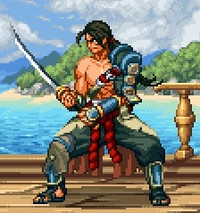 Before anybody says it in the comments, it is not Friday and I am technically posting fanart, but these were too awesome to pass up. Mojang (Minecraft) art director Markus Toivonen (junkboy) released a few new "demakes," which he used to make for Swedish gaming magazine Level, where he takes a modern game and redoes it in pixel art--and often changes up the game's genre in the process.

Here's the two new ones, followed by a bunch more:

StarCraft from a time long before LAN parties

Brutal Legend, appropriately using the SCUMM adventure game engine--whoever makes this will get my money

My only concern: would a 2D Super Mario Galaxy still have the same great soundtrack?

Bayonetta as a ruthless, quarter-munching shmup

A Metroidvania version of Bioshock, which would probably make a great portable game

If it were released for the SNES, Other M might use the Super Scope 6

Seriously, an arcade cabinet for Smash is just a license to print money

As I've said before, I'm a big proponent of 2D gaming and classic game design, so my opinion on these is pretty much a given. What about you? Would you give these "demakes" a shot?