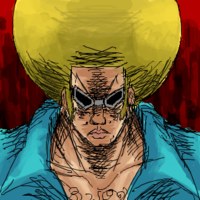 A new license rescue has been listed by Amazon in the first half of absurdist gag comedy Bobobo-Bo Bo-Bobo, with the release scheduled for March 27th from new licensor S'more Entertainment. From what is currently known, the new release will feature the first half of the series with 38 episodes, while the release will include both an English dub and English subtitles for $49.99.

The series was previously licensed by short-lived licensor Illumitoon Entertainment in 2007, which was formed by ex-Funimation executives before burning out in less than spectacular fashion two years later, but not before Bo^7 was aired on Cartoon Network as part of the channel's many animation blocks.

Synopsis:
In the year 3001.5, the entire world is under the tyrannical rule of the Maruhage Empire, and their ruler, Tsuru Tsurulina IV (Bald the 4th). His Hair Hunt troop captures innocent bystanders' hair, leaving the people bald and their villages in ruins. Standing against this evil regime is the heroic, but bizarre, rebel, Bobobo-Bo Bo-Bobo, who fights the Hair Hunt Troop with his powerful Hanage Shinken (Fist of the Nose Hair). Bo-bobo is on an exciting, gag-filled quest to deliver his own hairy brand of justice to evildoers everywhere.